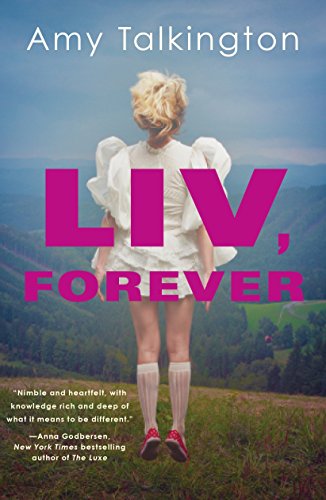 When Liv Bloom lands an art scholarship at Wickham Hall, she’s thrilled. The school’s traditions and rituals may be a little strange, but for the first time ever she has her own studio, supplies—everything she could want. Including Malcolm Astor, a legacy student with his own art obsession. Liv’s defenses melt, despite warnings from fellow scholarship kid Gabe Nichols not to get involved with Malcom.

But her bliss is doomed; weeks after arriving, Liv is viciously murdered. Gabe, the only one who can see her, is now her sole link to the world of the living. Together, Liv, Gabe, and Malcolm fight to expose the terrible truth that haunts the halls of Wickham.

Amy Talkington is an award-winning screenwriter and director living in Los Angeles. Before all that she wrote about music for magazines like Spin, Ray Gun, Interview, and Seventeen (mostly just as a way to get to hang out with rock stars). As a teenager in Dallas, Texas, Amy painted lots of angsty self-portraits, listened to The Velvet Underground and was difficult enough that her parents finally let her go to boarding school on the East Coast. Liv, Forever is her first novel.

A man in a black suit was waiting for me. He had polished shoes and white gloves, holding a sign that read Wickham Hall. It was written in the same font I’d seen on their website. I’d call it “ye oldy worldy.” But that’s just me. It’s the kind of font you can’t really read. The kind that screams to the world, “We’re so important, we don’t care if you can read our logo.” It’s the kind of font you’d see on a gravestone in London. Not that I’ve been to London. But I’m into fonts. It’s part of what I do.
The man looked at me with—well, pity might be a little strong. But it was certainly on the pity spectrum. Perhaps it was just sympathy. He noticed my fingernails and asked if I needed to go to “the powder room.”
“It’s not dirt. It’s ink,” I told him. “It’s permanently there.” The pity turned to something more like poorly veiled disgust. “No, not like tattoo ink. Like pen ink. I draw things.” He nodded his head like he couldn’t care less.
I’d said, “I draw things,” as if it were no big deal. Just something I do, like take a shower or go to school. But it’s all I do. Or at least it’s all I do that matters. I was certain it was the reason I was standing at baggage claim at Boston’s Logan Airport headed to the best prep school in the country for my last two years of high school. My grades certainly didn’t get me into Wickham Hall. I assumed it was my portfolio. I’d worked on it for months. I knew it was my only hope of getting out.
The man was surprised by how little I’d packed. One duffle bag for my clothes. And one very heavy suitcase.
“Shoes?” he asked as he lifted the suitcase with effort from the carousel.
“No, books, vintage magazines. Ink.” For my collages. I brought as much as I could carry. I wasn’t going to take any chances with the Wickham Hall school store.
As he rolled my bags to the car, I got my first taste of humidity. I’d always heard of it, and now it was hitting me in the face, as thick as the paint on a Monet canvas. I’d never been east of the Mississippi. I’d never even been east of the Grand Canyon. Fine, I’d never been east of Las Vegas. I’d hardly been out of Las Vegas. We went to Reno once. That was our biggest family vacation to date. My parents aren’t big on vacations. Not because they don’t like not working—they love not working—but vacations cost money. And that they never have.
So you can imagine what I thought when the man approached a limousine. I’m not kidding. A black stretch limousine. With tinted windows. “I was kinda more expecting a good ol’ American school bus. You know, the yellow ones?”
“Not at Wickham Hall.”

AFTER WE LEFT THE Boston area, I tried to roll down my window. But it was locked. I could see in the rearview that the man had noticed, but he didn’t offer help. Finally I asked. He obliged. I stretched out across the back seat, lying on my back so I could look straight up toward the sky. The sky and trees became blurry fields of color—blue, white, and green—stacked like a Rothko painting. Except Rothko almost never used  green.
When I sat back up, we were already in New Hampshire, where Live Free or Die is on every license plate. What a state motto. Much better than Nevada’s All for Our Country—what does that even mean? Live Free or Die is something I could get behind, and not just because it contains my name (phonetically). It’s passionate and romantic. I like all things Romantic. And I don’t mean mushy, cheesy romantic. I mean truly Romantic with a capital R. As in Byron, Shelley, Keats, and of course, William Blake.
Live Free or Die. It made me think of how Modigliani’s muse Jeanne Hébuterne jumped to her death while pregnant with their second child the day after he died from tuberculosis. Or how the Dada artist René Crevel gassed himself the day before the Congress of Writers for the Defense of Culture planned to censor his work.
There are countless stories from days past, but it’s hard to imagine someone actually dying for freedom or even for love these days—in this country at least. Everyone I know is way too apathetic to consider it. My parents rarely bother to vote. Even the guys at school who talked about joining the army, all they care about is job security. No one says he wants to do it for his country or for freedom. But maybe that’s because they think it’d sound lame. It wouldn’t sound lame to me.
Would I die for freedom? For love? I liked to think I had that in me, but how can you die for love if you’ve never felt it? And I don’t just mean I’d never had a boyfriend. I mean I’d possibly never felt love at all. The social worker said it was a protective mechanism. Maybe it was. I had four different foster families before I was finally adopted. I was practically bred not to love.
Or maybe it’s just that I got matched with the wrong family. It could happen, couldn’t it? Just ending up with the wrong parents, the same way you could end up with
the wrong guy on an Internet date.
Headed to the far north finger of the state, we passed through Manchester then Concord, and after several more hours, penetrating deeper and deeper into woods that
were more dense than I’d seen before, we approached a tall stone wall. I recognized it immediately from the website. It’s something they tout: fully enclosed within a wall built in 1781. I think it originally had something to do with the Revolutionary War. We drove along the perimeter for some time. It was so much bigger than I’d imagined. I wanted to say something to the man, but to be honest, he kind of scared me. So I saved it. Instead, I pulled out my moleskin notebook and ink.