Items related to The Mercury Fountain 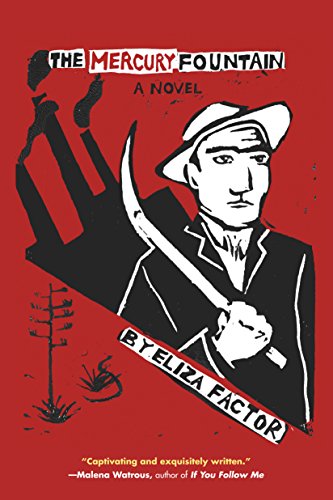 Eliza Factor’s first novel, The Mercury Fountain, explores what happens when a life driven by ideology confronts implacable truths of science and human nature. It also shows how leaders can inflict damage by neglecting the real needs of real people. Though the action takes place between 1900 and 1923, the resonance feel alarmingly contemporary. . . Factor counters convention with a sharp sense of character, evocative subplots and the dangerous allure of mercury itself.”
--New York Times Book Review

"Factor develops her characters in entertaining ways while building a novel of social realism."
--Kirkus Reviews

Set in a remote stretch of desert near the border of west Texas and Mexico at the turn of the twentieth century, this story follows the pursuits of Owen Scraperton as he struggles to establish Pristina, a utopian community based on mercury mining that aims to resolve the great questions of labor and race. As age, love, and experience cause Owen to modify his original vision, his fiercely idealistic daughter Victoria remains true to Pristina's founding principles setting them up for a major conflict that captures the imagination of the entire town. The Mercury Fountain combines realistic modern writing with elements from American and Greco-Roman mythology, taking its cue from Mercury, the most slippery and mischievous of gods, who rules over science, commerce, eloquence, and thievery.

Eliza Factor was born in 1968 in Boston, Massachusetts, and currently resides in Brooklyn, New York. The Mercury Fountain is her debut novel.

Eliza Factor: Eliza Factor was born in 1968 in Boston, Mass. She has lived in Washington, D.C.; Blois, France; San Francisco; Tempe, Arizona; and New York City. She has spent a lot of time in the desert, sniffing out old mercury mines, as well as waiting tables, teaching English, painting, film making, roofing, and bike messengering. She now finds herself living in Brooklyn with her husband, three kids, and a dog.

Book Description Paperback. Condition: New. Paperback. The Mercury Fountain takes place at the turn of the 20th century in a remote stretch of desert, West Texas. Owen Scraperton, a passionate Yankee, sets out to atone for his misspent youth b.Shipping may be from multiple locations in the US or from the UK, depending on stock availability. 312 pages. 0.331. Seller Inventory # 9781617750366