Items related to Earth and Air: Tales of Elemental Creatures 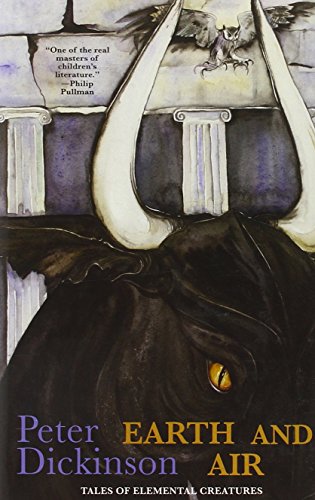 Praise for Peter Dickinson's children's books:"One of the real masters of children's literature."—Philip Pullman"Peter Dickinson is a national treasure."—The Guard-ian"Magnificent. Peter Dickinson is the past-master story-teller of our day."—The Times Literary SupplementIn three earthy and three airy stories, Peter Dickinson's changelings, gryphons, and gods get in the way of the rest of us who are struggling to find someone to fall in love with, something interesting to do, somewhere to run to. These are smart, funny, provocative stories, but even as they float the reader away on a cloud of myth, they remain firmly grounded. Includes a foreword by the author.Peter Dickinson is the author of over fifty books including Eva, Emma Tupper's Dairy, and the Michael L. Printz Honor Book The Ropemaker. He has twice received the Crime Writers' Association's Gold Da

Peter Dickinson: Peter Dickinson OBE has twice received the Crime Writers' Association's Gold Dagger as well as the Guardian Award and Whitbread Prize. His latest book is Earth and Air: Tales of Elemental Spirits (Big Mouth House). He lives in England and is married to the novelist Robin McKinley.

As Dickinson explains in his preface, the idea for a series of volumes about mythical beasts inhabiting each of the four elements—earth, air, water, and fire—began 20 years ago in a brainstorming session with his wife, novelist Robin McKinley. Their first collaborative volume in the series, Water, appeared in 2002; the second, Fire, in 2009. This solo effort by Dickinson focusing on both earth and air concludes the series. The six long stories here deal with such mythical beings as trolls, witches, ancient gods, wood demons, and more. One story is a loose reimagining of the Orpheus and Eurydice myth; another presents a bewildering variety of creatures on a distant planet. The prevailing tone of all six is somewhat dark, even saturnine, though not without flashes of hope. In content and style, they are sophisticated and challenging to the extent that the volume might have been published as an adult book. Certainly it has strong crossover appeal. Older teens and Dickinson fans of all ages will find the stories rewarding despite the investment of effort in the reading experience. Grades 9-12. --Michael Cart