Items related to My One Good Nerve

Dee, Ruby My One Good Nerve

My One Good Nerve 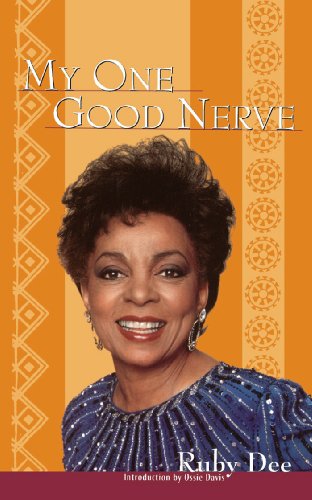 ""My One Good Nerve"" is an exuberant collection of writings in the down-home tradition by that incomparable icon of the human spirit, Ruby Dee. Married for 50 years to fellow actor Ossie Davis, Dee has led an astonishingly full life. But she has never forgotten where she comes from as an African American woman. Fans who have admired and drawn strength over the years from Dee's outspoken human rights advocacy and unforgettable characters are rewarded here with many glimpses into her memories and convictions. This book is an inspiration and a blessing.

Ruby Dee (New Rochelle, NY) grew up in Harlem and graduated from Hunter College in New York City. Inducted into the Theater Hall of Fame in 1989, she was an original cast member of Broadway classics such as A Raisin in the Sun and South Pacific and appeared in Spike Lee's Do the Right Thing and the landmark adaptation of Alex Haley's Roots. She performs her one-woman show, My One Good Nerve, in theatres across the country.

With this painfully sincere collection of poems, stories, and character pieces, Ruby Dee joins the unhappy pantheon of actors, such as Jimmy Stewart and Leonard Nimoy, who have strayed disastrously into scribbling. Most of these pieces are drawn from Dees traveling one-woman show, also called My One Good Nerve. And so, the pieces may perform better than they read. You can guess where Dee as performer might pause dramatically, where shed slip fully into a character, and where shed build cadences eloquently, but the words and lines themselves, ranging from prosaic to warmed-over to embarrassing, do not equal her actors gifts. She suffers from the misconception, common to many amateur poets, that adapting prose by shortening line lengths and inserting a few repetitions will indeed result in a poem: ``Tupac./Spelled backwards/Caput. Meaning/ Finished. Over. Ended. Done./Twenty-six was it?/Oh my God. So young/Mouths drop. Stop in/Unbelieving anguish and surprise . . .'' Her writing is arranged here loosely according to themea section on love, an aggregation of ``comic'' musings, grouped tributes to African-American heroes, and a woman-power wrap-up. There are well-intentioned allegorical musings on racism, fractured fairy tales and nursery rhymes, poems ``celebrating'' everyone from James Baldwin to Marvin Gaye . . . and it is all, with barely the breath of exception, misconceived, mishandled, and misbegotten. Dee writes what she knows, which is part of the problem. Shes piggybacking off tired modes and models, and shows neither the gifts nor the inclination to create anything original (or expertly derivative). All she has to offer is earnestness. As Oscar Wilde put it, ``A little sincerity is a dangerous thing, and a great deal of it is absolutely fatal.'' (A joint memoir by Dee and her husband, Ossie Davis, will be published by William Morrow, also in November.) (b&w photos, not seen) -- Copyright ©1998, Kirkus Associates, LP. All rights reserved.

1. My One Good Nerve

2. My One Good Nerve (Paperback or Softback)

3. My One Good Nerve

4. My One Good Nerve

5. My One Good Nerve

6. My One Good Nerve

7. My One Good Nerve

8. My One Good Nerve

9. My One Good Nerve