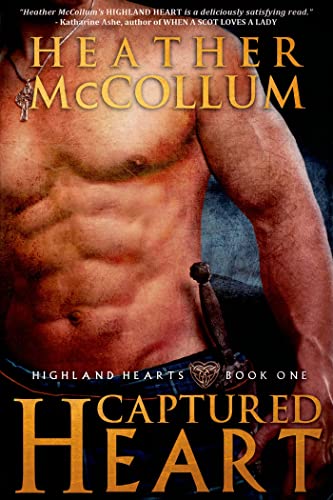 Fleeing with only her bow, horse, enormous pet wolf, and the cryptic clues hidden in her mother’s medicine journal, healer Meg Boswell gallops north towards freedom, running from the man who falsely accused her mother of witchcraft. Cursed with magical healing abilities, Meg knows that if she’s captured, she will die like her mother atop a blazing witch’s pyre.

Winter winds rip across the Highlands, pressing Chief Caden Macbain forward in his desperate plan to save his clan. He’s not above using an innocent woman to bargain for peace if it keeps his clan from starving. But Meg isn’t who Caden thinks she is, and when she kills a man to save the clan, he must choose between duty and her life. For although he captured her to force a peace, Meg's strength and courage have captured Caden's heart.

"A deliciously satisfying read." -Katharine Ashe, author of When a Scot Loves a Lady

Heather McCollum is an award winning, historical paranormal romance writer. She earned her B.A. in Biology from the University of Maine, much to her English professor's dismay. She is a member of Romance Writers of America, Heart of Carolina Romance Writers, and The Golden Network as a 2009 Golden Heart Finalist. Ms. McCollum's first three full-length paranormal romance novels, PROPHECY, MAGICK and MASQUERADE, were released in 2010 and 2011. The ancient magic and lush beauty of Great Britain entranced Ms. McCollum's heart and imagination when she visited there years ago. The country's history and landscape have been a backdrop for her writing ever since. She currently resides with her very own Highland hero and three spirited children in the wilds of suburbia on the mid-Atlantic coast. More information about Ms. McCollum and her books can be found at HeatherMcCollum.com.