Items related to The Race for Life

Makombe, Theo The Race for Life

The Race for Life 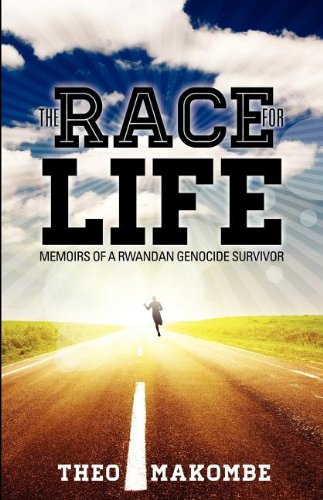 In one day a boy's life was changed-the relative tranquility of his world was shattered forever. For fourteen years, Nsanzabavunyi Theoneste Makombe had lived in the sleepy little village of Rukumbeli. He had gone to school and played with the children in the neighborhoods surrounding his own. His family had worshipped and celebrated with these people he thought were just like him. But following the death of Rwanda's president, Habyarimana Juvenal, everything changed. His Hutu neighbors had but one mission: Kill the Tutsi-every last one of them-and make them suffer! With machetes, clubs and other weapons, the Hutu pursued the terrified Tutsi, including the family Makombe. Everyone scattered, fleeing from killers bent on torturing their victims in unspeakable ways. Just before her life was taken by a murderous mob, Theo's mother gave her teen-aged son a command that saved his life: "...Run and never give up." Learn how a Gospel chorus and a series of miracles not only helped Theo survive the thirty-day massacre, but eventually revealed the love of God to this confused, hurting young man. See how the terrible mess of his life was transformed into a powerful message of hope and forgiveness-and how the Lord can do the same thing not only for individuals but entire nations.

Theo Makombe is a public speaker and evangelist who is passionate about the Gospel of Jesus Christ. After training and serving with Youth With A Mission in Rwanda and Scotland, Theo and his family moved to America to serve the Lord there. Over the years, Theo has helped in the planting and developing of several interdenominational ministries. Along with his wife, Bri, and their four children, they are currently living in Ohio.

1. The Race for Life