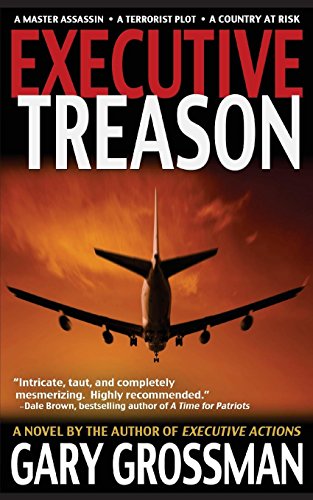 "Executive Treason is as topical as tomorrow's Internet blog ... fast-paced, with vivid characters and a plot right off the front pages. Surprises you on every page. A winner." --Larry Bond, New York Times bestselling author of DANGEROUS GROUND

The secret terrorist organization that came within a heartbeat of installing its agent as President of the United States in Executive Actions is back with a new (and more deadly) plot to destabilize the U.S. government. The mugging and murder of a female White House staffer leads Secret Service agent Scott Roarke to the elusive and mysterious assassin who manages to always stay one step ahead of him. But as the plot unfolds, new clues about the assassin's past come to light, and they just may give him the tools he needs to catch his quarry.

Grossman contributed to the New York Times and the Boston Globe, and was a reporter and columnist for the Boston Herald American. He covered presidential campaigns for WBZ-TV in Boston, and has produced more than 10,000 television series and specials for NBC News, CNN, NBC, ABC, CBS, FOX and 35 cable networks.

He is a multiple Emmy Award winning producer. He served as chair of the Government Affairs Committee for the Caucus for Television, Producers, Writers and Directors, and is a member of the International Thriller Writers Association, Military Writers Society of America, and Directors Guild of America. He is a trustee at Emerson College and serves on the Boston University Metropolitan College Advisory Board. Grossman has taught at Emerson College, Boston University, USC, and currently teaches graduate film and television at Loyola Marymount University in Los Angeles. He is a contributing editor to Media Ethics Magazine.