Items related to A Bestiary of Tolkien Coloring 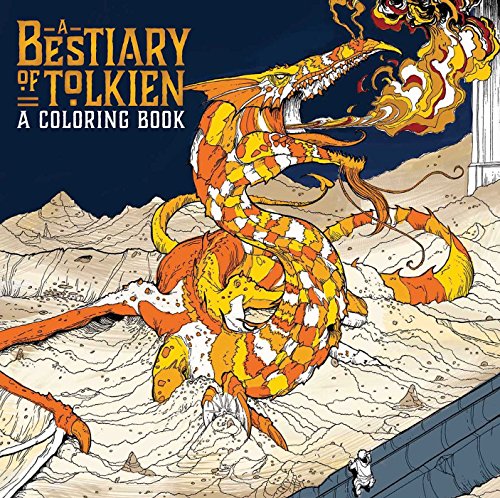 Gorgeous line art begs for color in this compendium of the beasts, monsters, and flora and fauna of Middle-earth. Bring your favorite creatures from the books into sharp detail with your colored pencils or markers. Smaug the dragon, Balrogs, Hobbits, and Elves give you plenty of opportunity for creativity and shading. Turn each page into a precious work of art!

This work is unofficial and is not authorized by the Tolkien Estate or HarperCollins Publishers.

Mauro Mazzara started drawing at the age of two...and he still hasn't stopped! He attended the Arte & Messaggio Illustration school in Milan before studying painting at the Brea Art Academy. He now works as a freelance illustrator for the fashion, publishing, and advertising industries.

Andrea Piparo was born in Rome in 1990, where he graduated from art school in via Ripetta and continued his studies by attending the illustration course at the International School of Comics. He has appeared in various collective exhibitions, produced several portraits on commission, and contributed to the 2013 calendar of the Italian National Police. He has also exhibited at various events such as Fantastika, Dozza (Bologna) in 2014 and at Wow Comics Space (Milan) in 2015. He currently lives and works in Castelnuovo di Porto in the province of Rome.

A Bestiary of Tolkien: A Coloring Book

Shipping: US$ 16.09
From United Kingdom to U.S.A.
Destination, rates & speeds