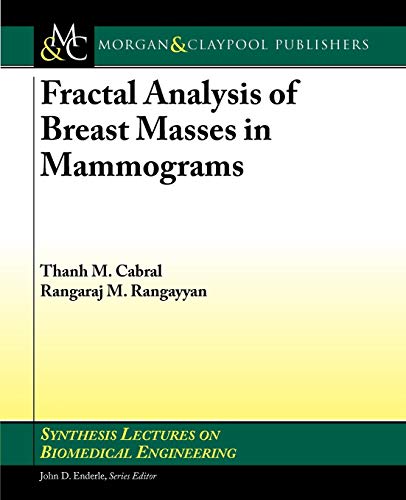 Fractal analysis is useful in digital image processing for the characterization of shape roughness and gray-scale texture or complexity. Breast masses present shape and gray-scale characteristics in mammograms that vary between benign masses and malignant tumors. This book demonstrates the use of fractal analysis to classify breast masses as benign masses or malignant tumors based on the irregularity exhibited in their contours and the gray-scale variability exhibited in their mammographic images. A few different approaches are described to estimate the fractal dimension (FD) of the contour of a mass, including the ruler method, box-counting method, and the power spectral analysis (PSA) method. Procedures are also described for the estimation of the FD of the gray-scale image of a mass using the blanket method and the PSA method. To facilitate comparative analysis of FD as a feature for pattern classification of breast masses, several other shape features and texture measures are described in the book. The shape features described include compactness, spiculation index, fractional concavity, and Fourier factor. The texture measures described are statistical measures derived from the gray-level cooccurrence matrix of the given image. Texture measures reveal properties about the spatial distribution of the gray levels in the given image; therefore, the performance of texture measures may be dependent on the resolution of the image. For this reason, an analysis of the effect of spatial resolution or pixel size on texture measures in the classification of breast masses is presented in the book.

The results demonstrated in the book indicate that fractal analysis is more suitable for characterization of the shape than the gray-level variations of breast masses, with area under the receiver operating characteristics of up to 0.93 with a dataset of 111 mammographic images of masses. The methods and results presented in the book are useful for computer-aided diagnosis of breast cancer.