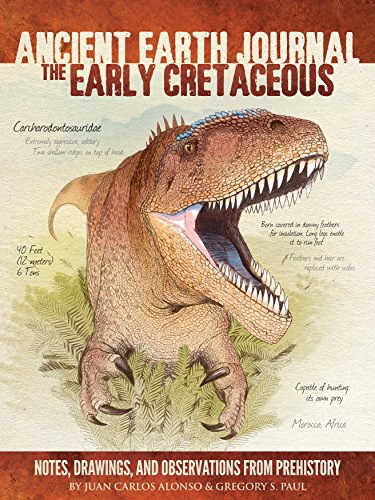 The Early Cretaceous brings readers closer to prehistoric life than ever before.

What it would be like to see a living, breathing dinosaur? The Early Cretaceous brings readers closer to prehistoric life than ever before. By combining the latest paleontological findings with highly detailed, intimate drawings of wildlife from the Early Cretaceous, readers will look into the eyes of some of the most fascinating creatures to ever inhabit the earth. Written and illustrated in the style of a naturalist's notebook, the viewer will be given a first-hand account of what it is like to stand alongside everything from the first birds to flying dinosaurs to some of the largest creatures ever to walk the earth. Through detailed illustrations and descriptive narrative, readers will discover how some dinosaurs survived polar blizzards, while others were able to pump blood five stories high to reach their brains. While many books on prehistoric life lump dinosaurs into the general timeline of the Mesozoic Period, no book currently dissects plant and animal life during one specific period. This allows the book to explore wildlife seldom featured in publications, many of them recent discoveries. The Early Cretaceous is backed by the research of one of paleontology's most acclaimed theorists, giving the book the most up to date scientific interpretation regarding animal behaviors, interactions, and recreations.

"The illustrations and artistic layout are exceptionally beautiful. This is a book children will cherish, keep, and remember, and adults will be delighted to add to their collection." - Sylvia Czerkas, Author and Director The Dinosaur Museum, Utah

"The illustrations are fantastic! The Nigersaurus 'grazing' is one of the nicest reconstructions of a rebbachisaurid I've ever seen." - Matthew C. Lamanna, Ph.D., Assistant Curator, Section of Vertebrate Paleontology, Carnegie Museum of Natural History

"I *love* it! The style reminds me of a very cool sci-fi book that I had as a kid (and still have), Dougal Dixon's After Man: A Zoology of the Future. Dixon's book is a wonderful, lavishly illustrated introduction to evolutionary principles that helped set me on the path to becoming a professional paleontologist. I suspect your book is going to be similarly inspirational to many of today's aspiring scientists." - Matthew C. Lamanna, Ph.D., Assistant Curator, Section of Vertebrate Paleontology, Carnegie Museum of Natural History

Juan Carlos Alonso is an award-winning Cuban American graphic designer, creative director, and illustrator. He has more than thirty years of experience in the graphic design/illustration field.

In 1992, he founded Alonso & Company, a creative boutique specializing in branding, design, and advertising. He has been working with clients of all sizes from Fortune 500 to local businesses and has forged strong relationships with companies including the NBA franchise The Miami Heat, Bacardi Rum, Ryder System, Pitney Bowes, and Capitol Records. Alonso & Company has attained international acclaim for work in advertising and graphic design.

Alonso's passion for nature has taken him around the world, from Australia to the Galapagos Islands, to study animals. Along with his work in the graphic arts, he is also an accomplished wildlife sculptor focusing mostly on prehistoric animals. He is also a three-time winner of the Outstanding Science Trade Book for Students K-12 (National Science Teachers Association and the Children's Book Council) and Ancient Earth Journal:The Late Jurassic was named Prehistoric Book of the Year by the readers of Prehistoric Timesâ?? magazine.

Gregory S. Paul is an American freelance researcher, author, and illustrator who works in paleontology. He is best known for his work and research on theropod dinosaurs and his detailed illustrations, both live and skeletal. Professionally investigating and restoring dinosaurs for three decades, Paul received an on-screen credit as a dinosaur specialist on Jurassic Park and Discovery Channel's When Dinosaurs Roamed America and Dinosaur Planet. He is the author and illustrator of Predatory Dinosaurs of the World (1988), The Complete Illustrated Guide to Dinosaur Skeletons (1996), Dinosaurs of the Air (2001), The Princeton Field Guide To Dinosaurs (2010), Gregory S. Paul's Dinosaur Coffee Table Book (2010), and editor of The Scientific American Book of Dinosaurs (2000). From 1977 to 1984, Paul was an informal research associate and illustrator for Robert Bakker in the Earth and Planetary Sciences department at Johns Hopkins University in Baltimore. He has been a member of the Society of Vertebrate Paleontology since 1979, the National Center for Science Education since 1992, and the Guild of Natural Science Illustrators since 1986.

"Presenting current facts with a soupcon of creativity, this eye-catching title will be coveted by young dinophiles." - School Library Journal

"I think the entire project was well thought out. By concentrating on the early cretaceous you guys were able to highlight a large number of species often overlooked by other books - making this a must-have for any dinosaur fan." - Phil Hore, National Dinosaur Museum, Australia

"I absolutely love the book that you and Paul have put together! I'm a huge fan of your artwork and really enjoy the layout. It's not too heavy on the science and I can see that it will be easy enough for young people to understand." - Andrew R. C. Milner, Paleontologist and Curator, St. George Dinosaur Discovery Site at Johnson Farm

"I think this book is a wonderful addition to dinosaur literature for young readers. The illustrations are superb and the text is precise and accurate. Well done!" - Peter Larson, Paleontologist and President at Black Hills Institute of Geological Research

"The high-quality illustrations of this short but fascinating book are a sign of the expertise of the creators....sure to be popular with dinosaur-mad" - Booklist

Book Description 2015. Hardcover. Condition: New. Hardcover. A 2016 Outstanding Science Trade Book for Students K-12 (National Science Teachers Association-Children's Book Council The Early Cretaceous brings readers closer to prehistoric life than e.Shipping may be from multiple locations in the US or from the UK, depending on stock availability. 112 pages. 0.900. Seller Inventory # 9781633220331

Book Description 2015. Hardcover. Condition: New. Hardcover. A 2016 Outstanding Science Trade Book for Students K-12 (National Science Teachers Association-Children's Book Council The Early Cretaceous brings readers closer to prehistori.Shipping may be from our Sydney, NSW warehouse or from our UK or US warehouse, depending on stock availability. 112 pages. 0.900. Seller Inventory # 9781633220331

6. The Early Cretaceous: Notes, Drawings, and Observations from Prehistory