Items related to The Black Rock Desert Trilogy: River of No Return

The Black Rock Desert Trilogy: River of No Return 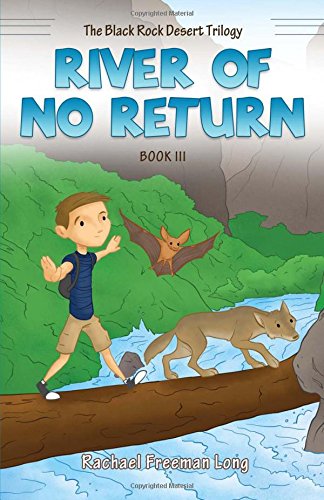 "You're criminals," burst out Jack. "You're killing all the animals on our mountain!" Jack's world falls apart when poachers hunt animals in the Black Rock Desert for money. These men once served their country in the US Air Force, but now they're outlaws, dangerous criminals who will stop at nothing to get what they want. Jack teams up with his friends, Sonny the coyote and Pinta the little pallid bat, to try to stop them. In a race against time, they dodge bullets, wolves, and trees exploding into flames in pursuit of their enemies, to get them behind bars. As their world spins out of control, Jack must rely on his wits and the instincts of his friends to survive and make their mountain range safe again. Will their luck hold with rewards of gold and long-lasting friendships? Find out in this explosive third and final book in the Black Rock Desert Trilogy. "The hidden lives of bats and their importance in the natural world continues to unfold in this thrilling third book in the Black Rock Desert Trilogy. Jack, Pinta, and Sonny have another adventure in the wilderness and tell us something about the role of pollinators." --Jim Robbins Science Journalist, The New York Times

1. The Black Rock Desert Trilogy : River of No Return