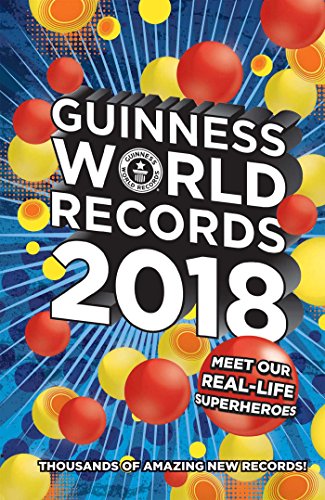 Ever since the first Guinness World Records was published in 1955, people have been searching for new ways to push the boundaries of achievement. This new edition of fabulous feats includes profiles of people who set new standards for highest, fastest, largest, or oldest; natural wonders that will cause readers to gape in amazement; and mechanical marvels that make the inventions of yesteryear look like child’s play.

GUINNESS WORLD RECORDS (GWR) is the global authority on record-breaking achievement. First published in 1955, the iconic annual Guinness World Records books have sold over 138 million copies in over 20 languages and in more than 100 countries. Additionally, the Guinness World Records: Gamer’s Edition, first published in 2007, has sold more than 5 million copies to date. Guinness World Records’ worldwide television programs reach over 750 million viewers annually and more than one million people subscribe to the GWR YouTube channel, which enjoys more than 300 million views per year. The GWR website receives 21 million visitors annually, and we have over 12 million fans on Facebook.

Gr 3–6—It's hard for anyone interested in trivia or pop culture to ignore the lure of a new Guinness book. Kids will want to get their hands on this shiny, metallic, oversize volume. There are more categories than ever, including "most underpants pulled on in one minute!" But there are serious topics as well and lots of spotlights and photos of people who unleash their "inner superheroes." A chapter honors imaginary superheroes, while another section recognizes real "superhumans." The book lets readers know that they, too, can be the best in whatever they attempt, be it strength, endurance, intelligence, or persistence. There are copious records devoted to sports, transportation, animals, and music and pop culture. Preteens will likely be excited to learn about the highest-earning celebrities. And don't miss the eating records, such as the fastest time to drink a bottle of ketchup (32.37 seconds). VERDICT A solid addition to most collections, especially where additional facts or trivia offerings are needed.—Sharon Verbeten, Brown County Library, Green Bay, WI