Items related to Tashi and the Big Stinker (7) (Tashi series) 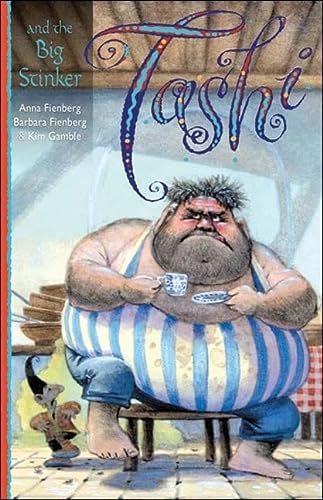 Tashi’s life is never dull. In the seventh book of the series, Tashi plots with the wife of Chintu the giant to rid the village of his Only Brother—a giant who will eat anything in sight. Unless Tashi can stop him, Only Brother may even eat the villagers. Things go horribly wrong when a stranger appears with a magic flute, but in the face of trouble Tashi acts fast and saves the village from a terrible disaster.

Grade 2-4-Two more tall tales from Australia. Sixty-four line drawings amplify guffaws for Tashi's first yarn of a giant with a mooching brother-in-law whose after-bean-eating explosions give the book its name. Fans of Dav Pilkey's "Captain Underpants" series (Scholastic) will welcome the humor and appreciate the protagonist, who always makes himself the hero of his playground stories that he shares with his friend Jack. Unfortunately, the second tale is but a light (and indirectly credited) variation on the Pied Piper of Hamelin, with an ending that challenges readers to decide what they would have done in the musician's place. The illustrations for this section are solemn, but Tashi's saving of the children lightens the mood. A few British spellings and terms may create questions, but will not prevent American pleasure.
Gay Lynn Van Vleck, Henrico County Library, Glen Allen, VA
Copyright 2001 Reed Business Information, Inc.

1. Tashi and the Big Stinker

4. Tashi and the Big Stinker (Paperback)

Book Description 2007. Paperback. Condition: New. 1st. Paperback. 'The giant just lifted the roof off, scooped up a pig and gobbled it down.'Chintu the giant's Only Brother will eat everything in the village unless Tashi can stop him and things go terrib.Shipping may be from multiple locations in the US or from the UK, depending on stock availability. 63 pages. 0.082. Seller Inventory # 9781741149715

7. Tashi and the Big Stinker

10. Tashi and the Big Stinker