Items related to The Secrets of the Dead

Harper, Tom The Secrets of the Dead

The Secrets of the Dead 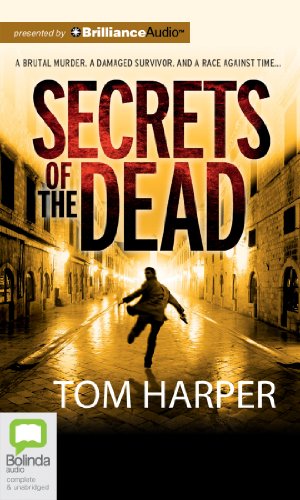 In a villa on the coast of Montenegro, Abby Cormac witnesses the brutal murder of her lover, diplomat Michael Lascaris. The last thing she remembers is a gun pointed directly at her. She wakes to find herself at the centre of a diplomatic nightmare. Everyone wants an answer but no one wants to listen. Even her employers at the Foreign Office believe she's hiding something. She is completely alone. As Abby tries to piece together the last few months of Michael's life in order to get at the truth, she soon realises that he wasn't quite what he seemed. What exactly was his relationship with one of the most ruthless men in the Balkans - a war criminal who has never been brought to justice? And what links Michael's gift to her of a gold necklace with its Christian monogram, a 4th century manuscript left in the shadow of Emperor Constantine's palace at Trier and an inscription on a tomb in Rome? When Abby investigates further, it becomes clear that someone wants to suppress a secret, one that has been kept hidden for centuries. And they will stop at nothing to do so...

Tom Harper won the Crime Writers Association debut award in 2001 for The Blighted Cliffs. He is also the author of Knights of the Cross, The Lazarus Vault, The Lost Temple, The Mosaic of Shadows, and Siege of Heaven

Praise for Other Titles by Tom Harper:

"In the tradition of The Da Vinci Code, a page-turner of a novel. Like Dan Brown, Tom Harper knows how to ratchet up the tension."
—Choice magazine

"Scholarly but speedy narrative, steeped in medieval horrors ranging from flogging to famine, all anchored in what feels like a passion for history and spelling out the way things were."
—Literary Review

"Tom Harper writes with strident clarity in this epic tale of murder and betrayal, bloodshed and romance. Gripping from the first page, the reader is swept up in this colourful and convincing portrayal of an Emperor and his realm, under siege. Well-researched, and cinematic in its imagery, this is a fast-paced and exciting debut."
—Ink

"Harper effortlessly draws the reader into the court intrigues and conspiracies of 11th-century Byzantium in his outstanding debut."
—Publishers Weekly
From the Paperback edition.