Items related to The Forests of Silence (Deltora Quest Series) 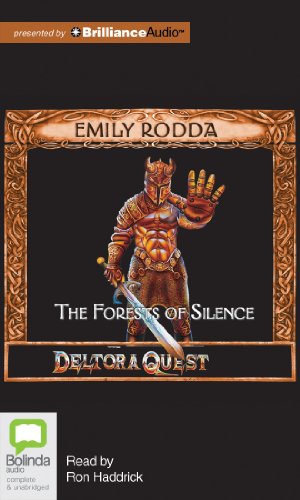 The evil Shadow Lord is plotting to invade Deltora and enslave its people. All that stands against him is the magic Belt of Deltora with its seven gems of great and mysterious power. When the gems are stolen and hidden in dark, terrible places throughout the kingdom, the Shadow Lord triumphs and Deltora is lost. In secrecy, with only a hand-drawn map to guide them, two unlikely companions set out on a perilous quest. Determined to find the lost gems and rid their land of the tyrant, they struggle towards their first goal ― the sinister Forests of Silence.

Emily Rodda is the author of the hugely successful Deltora Quest series, with over two million copies in print. Winner of the Children’s Book Council of Australia’s Book of the Year (Younger Readers) Award a record five times, she seems to know instinctively what children want to read. She currently lives in Sydney, Australia.