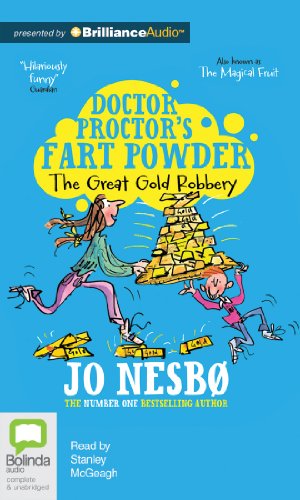 When a Russian billionaire robs the Norwegian Gold Reserve and melts the last remaining gold bar into the Premier Soccer League trophy, it’s up to Doctor Proctor, Nilly, and Lisa to get the trophy and save Norway.

But with a failed break-in attempt into the billionaire’s subterranean gold-melting lab and the Norwegian Gold Reserve Inspection only three days away, the only way to retrieve the trophy is to win it back. Hoping to prevent national panic and uproar, Nilly and Lisa join the Rotten Ham soccer team and use the Fartonaut Powder, along with a handful of Doctor Proctor’s other wacky inventions, to try and lead the hopeless underdog team to victory before time runs out.

Jo Nesbo is the most successful Norwegian author of all time. He has sold more than 20 million copies of his novels wand his Doctor Proctor series has been translated into more than 35 languages. The first book in the series, Doctor Proctor's Fart Powder, sold more copies in his native Norway than any other children's debut.

Book Description Bolinda Publishing, 2013. MP3 CD. Condition: Very Good. Audio book. Very Good: a copy that has been read, but is in excellent condition. Pages are intact and not marred by notes or highlighting. The spine remains undamaged. Most items will be dispatched the same or the next working day. Seller Inventory # mon0012358247

Shipping: US$ 10.16
From United Kingdom to U.S.A.
Destination, rates & speeds