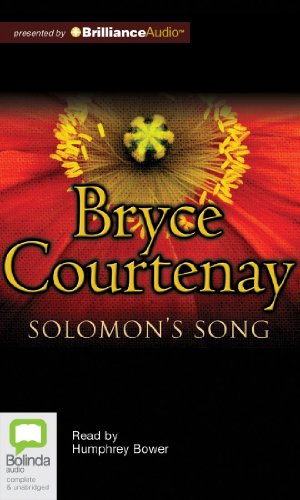 The third book in a trilogy comprising Potato Factory, Tommo and Hawk, and Solomon's Song

This is the story of two families―branches of the Solomons―transported to an alien land, both of whom eventually grow rich and powerful but who, through three generations, never for one moment relinquish their hatred for each other. It is also the story of our country from the beginning until we came of age as a nation. I have learned a great deal about Australia and those things which concern us as a people and make us, in many ways, who we are today. To write this book, I visited Gallipoli and came away deeply saddened by the terrible waste of our young blood. We would never be quite the same again. It has been a grand adventure and I hope that you will find Solomon's Song a good and powerful story. No writer can possibly hope for more.

Bryce Courtenay, bestselling Australian author, wrote his first book, The Power of One, at the age of fifty-five. This became the largest-selling book by a living Australian author within Australia, with over half a million copies sold locally. Having lived in Sydney for forty years, Bryce is a patriotic Australian, who is passionate about Australia becoming a truly great nation in the 21st century. Committed to the cause of literacy and the importance of motivating young people to read, he is actively involved with literacy programs in primary schools Australia-wide.