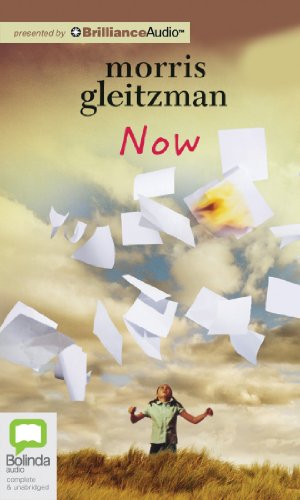 Set in the current day, this is the final book in the series that began with Once, continued with Then and is... Now. Felix is a grandfather. He has achieved much in his life and is widely admired. He has mostly buried the painful memories of his childhood, but they resurface when his granddaughter Zelda comes to stay with him. Together they face a cataclysmic event armed only with their gusto and love – an event that helps them achieve salvation from the past, but also brings the possibility of destruction.

Morris Gleitzman was born in Lincolnshire and moved to Australia in his teens. He worked as a paperboy, a shelf-stacker, a frozen chicken de-froster, an assistant to a fashion designer, and more before taking a degree in Professional Writing at Canberra College and becoming a writer. He has written for TV, stage, newspapers, and magazines but is best-known for his hugely succesful children's books including Two Weeks with the Queen, Bumface, and Once.

NOW is the third of the Felix stories (after ONCE and THEN). Surgeon Felix survived the Holocaust and now lives in Australia with his granddaughter, Zelda. Narrator Mary-Anne Fahey is outstanding in her portrayals of the elderly Felix and the young Zelda. Fahey underscores Zelda's exuberance and her very Aussie accent while Felix sounds more subdued and contemplative. Particularly moving are Zelda's thoughts as she tries to live up to her beloved grandfather's philosophy that now--living in the present--is best while the bad is better left in the past. The author's closing remarks add to the poignancy of these moving stories of survival. S.G.B. Winner of AudioFile Earphones Award © AudioFile 2010, Portland, Maine