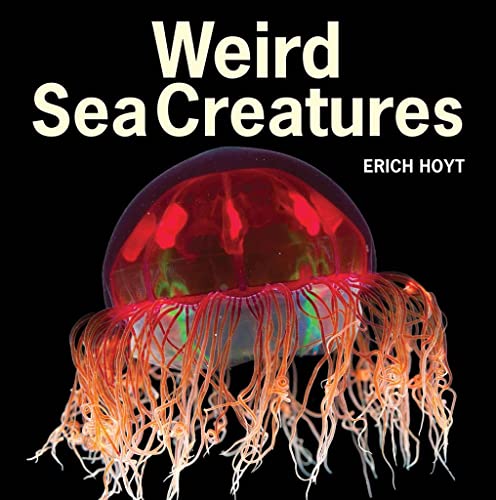 An illustrated look at the weird and wonderful creatures that live in the very deepest parts of the sea.

Humans have always wondered, with a mixture of fear and fascination, what lurks beneath the surface in the depths of the ocean. In this book, Erich Hoyt introduces 50 of the oddest creatures you will ever meet in the sea. From the carnivorous comb jelly to the lantern-carrying deep-sea dragonfish, from a vampire squid with giant eyes to dancing jellyfish, Hoyt explores these peculiar conditions and their equally peculiar environment.

These creatures have adapted to lack of light and, using sound pulses (echolocation) or light-producing organs and pigment cells (emitting light via bioluminescence), they are able to communicate without giving their location away to predators.

These stunning, captivating photographs weren't taken from the portholes of submarines. Photographers David Shale, Solvin Zanki and Jeff Rotman worked with oceanography institutes, museums and the BBC Natural History Unit, taking long cruises across the ocean to record and try to understand these little-studied residents of the deep sea. To capture the creatures for observation, a net was lowered far beneath the surface. As soon as the trawl was hauled aboard, the photographers would race to transfer the most unusual animals to fresh seawater aquariums in a chilled laboratory on board.

These pages let readers gaze into strange, wild eyes and study faces with toothless or crooked smiles that witness the fruits of deep-sea evolution. Informative captions explain what the patterns of lights on their bodies are "saying" to others in their absolutely dark world. The wonder and extraordinary weirdness of what lives in the deep seas, so far away from us and yet so close, will become more familiar with this book.

Erich Hoyt has spent much of his life on or beside the sea, researching whales and dolphins and ocean conservation. Hoyt is the acclaimed author of 18 books including Orca: The Whale Called Killer, Creatures of the Deep, and Whale Rescue. Based in Scotland, he works for WDC, Whale and Dolphin Conservation, lecturing and doing research in Russia, Japan, the Mediterranean, the Caribbean, and offshore on the high seas.

Bright and colourful over-sized photographs...set on a deep-sea black background, simply pop from the page, allowing one to imagine how these creatures would appear in the ocean... The creature descriptions are written for older students and adults but with younger readers in mind. ... While the introduction and some of the captions make for a challenging read for younger people, the photos are awesomely intriguing... a wonderful addition to an ocean life collection or a special gift to a future oceanographer. Highly recommended. (Sherry Faller Canadian Materials 2013-06-07)

Kids who prefer non-fiction and love weird stuff will leaf through this book again and again. It features incredible photographs of 50 of the oddest animals that live in the sea. The images appear to be illuminated on the glossy black pages for this look at creatures that live in the deepest parts of the sea. Not only weird, many are elusive, having only been recently discovered and are therefore unnamed. (City Parent 2013-05-01)

Close-up photos of 50 creatures--gathered, mostly, from ocean deeps--demonstrate that even our own planet's residents can look really, really alien... [The] picture gallery features full-page side or front views of animals ranging from bulbous sea cucumbers and sea anemones to an exaggeratedly toothy viperfish, a writhing benthic octopus and a furry crustacean evocatively dubbed a yeti crab.... Eerie, riveting eye candy for budding biologists and casual browsers alike. (Kirkus Reviews 2013-05-15)

In this book, Erich Hoyt explores the strange and hostile environment where what appears weird is the norm. The photographers took long cruises across the oceans to capture and record these little-known creatures. Inside these pages you will look with fear and fascination at 52 of the oddest animals you will ever meet... The wonder and extraordinary weirdness of what lives in the deep sea, so far away from us and yet so close, will start to become familiar with this book. (Sylvia Earle Mission Blue Sylvia Earle Alliance 2013-04-01)

(starred review) Fangs, fur, and photophores abound in this colorful celebration of decidedly odd and recently discovered species. Through 50 gorgeous photos, readers are introduced to a yeti crab; a spined pigmy shark... an album of rare beauty. Stunning full-page photos give readers a rare close-up view of animals ranging in size from a 1/24 inch oikopleura squirt to a six-foot-long orangeback flying squid, each accompanied by a brief informative paragraph... This is a veritable book of revelations. A feast for the eye and a tickle for the mind. (Patricia Manning School Library Journal 2013-07-01)

In this book, the reader will be introduced to 50 weird sea creatures such as the Carnivorous Combjelly, the Deep-Sea Brittle Star and the Squat Lobster to name just a few. Many have been discovered by scientists so recently that they have no definite scientific name. This resource has spectacular images with detailed background information for each caption. The photographers took long cruises across the oceans to capture and record these odd, unknown sea creatures. Several of these creatures are found in the deepest part of the sea. The introduction discusses how these creatures adapt to their underwater environment. The author encourages the reader to take in the wonder, the extraordinary weirdness, of what lives in the sea. This book would appeal to young and older readers who are fascinated by the many creatures who live in the deep. (Cynthia Smyth Resource Links Vol 19 No 1 2013-10-01)

Book Description Hardcover. Condition: New. Hardcover. Humans have always wondered, with a mixture of fear and fascination, what lurks beneath the surface in the depths of the ocean. In this book, Erich Hoyt introduces 50 of the oddest creatur.Shipping may be from multiple locations in the US or from the UK, depending on stock availability. 63 pages. 0.476. Seller Inventory # 9781770851979

Book Description Hardcover. Condition: New. Hardcover. Humans have always wondered, with a mixture of fear and fascination, what lurks beneath the surface in the depths of the ocean. In this book, Erich Hoyt introduces 50 of the o.Shipping may be from our Sydney, NSW warehouse or from our UK or US warehouse, depending on stock availability. 63 pages. 0.476. Seller Inventory # 9781770851979