Items related to Enough to Kill a Horse

Enough to Kill a Horse 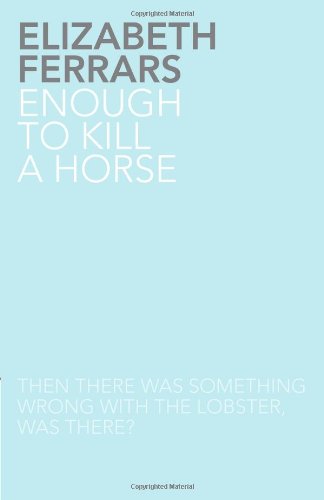 Fanny Lynam's cocktail party is awkward to arrange. Her old friend Clare is not eager to come, the ill-tempered Tom is sure to quarrel with whomever he can, and Fanny is nervous about meeting the young widow, Laura Greenslade, who has just become engaged to her half-brother, Kit. Anxious to impress, Fanny prepares her specialty of lobster patties for the guests, but when one of them dies in the night, accusations of murder abound, and her quaint little village is peaceful no more.

Elizabeth Ferrars was one of the most distinguished crime writers of her generation. She was described by Ellery Queen's Mystery Magazine as 'The writer who may be the closest of all to Christie in style, plotting and general milieu'. Born in 1907 in Rangoon, Burma, the author grew up in Hampshire, England, before studying journalism in London. Her first crime novel, Give a Corpse a Bad Name, was published in 1940. During her career, she wrote more than seventy novels and became immensely popular in America, where she was published as E.X. Ferrars. In 1953, she became a founding member of the British Crime Writers' Association and, in the early 1980s, was awarded its Silver Dagger for a lifetime's achievement. She died in 1995.

1. Enough to Kill a Horse

Book Description Langtail Press 2010-11-23, 2010. Paperback. Condition: Very Good. Item is in very good condition. If supplemental codes/CDs for textbooks are required please contact us prior to purchasing as they may be missing. Seller Inventory # DS-1780020309-2

2. Enough to Kill a Horse