Items related to Murder in the Basement

Berkeley, Anthony Murder in the Basement

Murder in the Basement 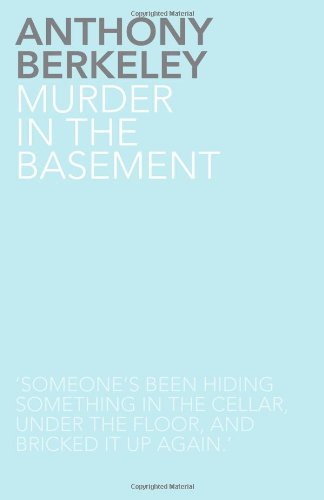 A ROGER SHERINGHAM MYSTERY. Roger and Molly Dane have something of a surprise in their new house. When Roger explores the basement on return from their honeymoon, he discovers something odd with the flooring. Hoping to find buried treasure, he digs up the body of a woman instead. Chief Inspector Moresby and Roger Sheringham are then left with the task of discovering who the lady was, how she came to be there, and who shot her in the back of the head.

Born in 1893, Anthony Berkeley (Anthony Berkeley Cox) was a British crime writer and a leading member of the genre's Golden Age. Educated at Sherborne School and University College London, Berkeley served in the British army during WWI before becoming a journalist. His first novel, The Layton Court Murders, was published anonymously in 1925. It introduced Roger Sheringham, the amateur detective who features in many of the author's novels including the classic Poisoned Chocolates Case. In 1930, Berkeley founded the legendary Detection Club in London along with Agatha Christie, Freeman Wills Crofts and other established mystery writers. It was in 1938, under the pseudonym Francis Iles (which Berkeley also used for novels) that he took up work as a book reviewer for John O'London's Weekly and The Daily Telegraph. He later wrote for The Sunday Times in the mid 1940s, and then for The Guardian from the mid 1950s until 1970. A key figure in the development of crime fiction, he died in 1971.

1. Murder in the Basement

2. Murder in the Basement

Book Description The Langtail Press, 2011. Condition: Good. A+ Customer service! Satisfaction Guaranteed! Book is in Used-Good condition. Pages and cover are clean and intact. Used items may not include supplementary materials such as CDs or access codes. May show signs of minor shelf wear and contain limited notes and highlighting. Seller Inventory # 178002147X-2-4

3. Murder in the Basement