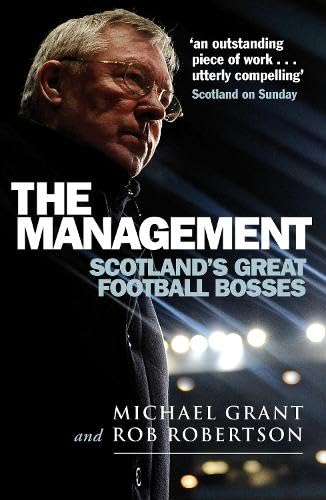 Why has Scotland produced so many of the best football managers in the world? Based on exclusive interviews with the men themselves, their players or close friends and family, Michael Grant and Rob Robertson reveal the huge contribution that Scottish managers like Sir Alex Ferguson, Sir Matt Busby, Bill Shankly, Jock Stein, Tommy Docherty, Jim McLean, Kenny Dalglish, George Graham, Walter Smith, Gordon Strachan, Alex McLeish and David Moyes, as well as a host of others, have made to the world game. This clever, original and brilliantly-realized analysis presents a fascinating account of each man, profiling their character and methods, individual strengths and weaknesses, and their impact on club or international football. It is a deeply-researched and compelling story which presents new material on many of the greats, particularly Busby and Stein, and highlights the enormous Old Firm contributions of, among others, Willie Maley, Bill Struth and Graeme Souness.With an analysis of the role of mining, heavy industry and politics in producing these tough, natural leaders, witty anecdotes on the great managers' run-ins with the media, a comprehensive roll of honor showing everything they have won, and an assessment of whether Scotland will continue to produce charismatic and successful bosses in the future, The Management is insightful, measured, revealing and utterly unique.

Michael Grant has been a football writer for over two decades and covered Scottish club and international football all over the world, including three World Cups and three European Championships. He worked in Inverness before moving to the Press & Journal in Aberdeen and then, in 1999, becoming chief football writer of The Sunday Herald. He has been chief football writer of The Herald since 2009. He suspects 1983 was as good as football can get. Rob Robertson is an award-winning staff sports writer with The Scottish Daily Mail. The former Scotland Young Journalist of the Year has previously written books on the rise of Scottish tennis star Andy Murray, the inside story of how Vladimir Romanov took control of Heart of Midlothian football club and The Don, the authorized biography of Aberdeen and Scotland legend Willie Miller.

Shipping: US$ 11.70
From United Kingdom to U.S.A.
Destination, rates & speeds