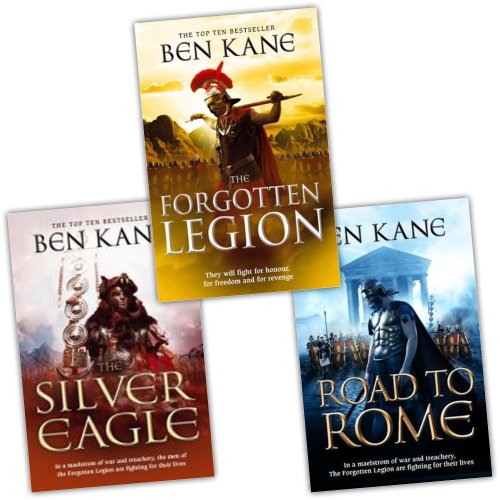 Title In This Collection Are:- The Silver Eagle The Road to Rome The Forgotten Legion The Road to Rome (Forgotten Legion Chronicles) Having survived the perils of a journey across half the world, Romulus and Tarquinius are press-ganged into the legions, which are under imminent threat of annihilation by the Egyptians. Meanwhile in Rome, Romulus's twin sister Fabiola lives in fear for her life, loved by Brutus, but wooed by Marcus Antonius, his deadly enemy. Soon after, Romulus fights at Zela, the vicious battle where Caesar famously said, 'Veni, vidi, vici'. Tarquinius, separated from Romulus in the chaos of war, hides in Ale The Forgotten Legion (The Forgotten Legion Chronicles) Romulus and Fabiola are twins, born into slavery after their mother is raped by a drunken nobleman. At thirteen years old they are sold - Romulus to gladiator school, Fabiola into prostitution, where she will catch the eye of one of the most powerful men in Rome. Tarquinius is an Etruscan, a warrior and soothsayer, born enemy of Rome, but doomed to fight for the Republic in the Forgotten Legion. Brennus is a Gaul, his entire family killed by the Romans, and he rises to become one of the most fam The Silver Eagle: In a maelstrom of war and treachery, the men of the Forgotten Legion are fighting for their lives (Forgotten Legion Chronicles) Now Brennus the Gaul, Tarquinius the Etruscan soothsayer and Romulus, bastard son of a Roman nobleman, are prisoners of Parthia. They dream of escape, but in the brutal fighting which lies ahead, only two will survive.Meanwhile, Fabiola, Romulus's twin sister, is caught up in the vicious eddies of Roman politics. Hunted by slave catchers she flees, hoping to find her lover, Brutus, bound for Alexandria with Caesar.