Items related to Preparation for the Next Life [Paperback] [Feb 04,... 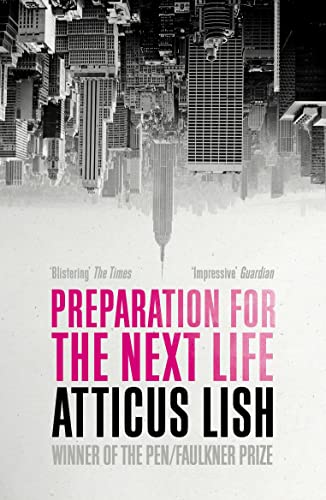 "Preparation for the Next Life is dizzying in its ambition and exhilarating in its triumph." -The New York Times Book Review

"As bold and urgent a love story as you’ll read this year." -Wall Street Journal

"Preparation for the Next Life, by Atticus Lish, is an astounding first novel about a world so large there is, sometimes, nowhere to go; a world so small the people in it, sometimes, get lost. The book has the boundless, epic exhilaration you expect to find only in a writer as mighty as, say, Walt Whitman." -The New York Review of Books

"Lovely and soft, tragic and cutting . . . maybe the most surprising novel of the year, for the author’s sudden, astounding appearance on the scene, yes, but more for the temporal details matched succeeded by glowing tenderness." -Vanity Fair

"A sledgehammer to the American dream." -Kirkus Reviews

"One of the most acclaimed debut novelists of the year." -New York Observer

"This novel is nothing less than a triumph, worthy of every heroic adjective a critic could throw. It is a reminder, plain and simple, of what fiction is for." -Financial Times

"Atticus Lish writes with beauty, striking attention to detail, and painful honesty about life on the margins of America about the people we don’t see, the places we don’t go." -BuzzFeed

Not since Charles Frazier’s Cold Mountain have such arduously yearning treks been made through maddening, heartbreaking obstructions in the name of love.” - New York Journal of Books

"In the twenty-first-century United States, oppression is disorganized, random and proceeds largely through neglect. Still, it crushes plenty of people. The wretched of the earth are here among us, for the most part silenced but with this novel, Lish has given them an unmistakable voice." -The Nation

"Atticus Lish’s Preparation for the Next Life, published this month, is the first novel I’ve read in ages that takes New York as seriously with as much fortified realism as Dubliners takes Dublin" -Flavorwire

"So much of American fiction has become playful, cynical and evasive. 'Preparation for the Next Life' is the strong antidote to such inconsequentialities. Powerfully realistic, with a solemn, muscular lyricism, this is a very, very good book" Joy Williams

"[Preparation for the Next Life] is devastatingly good. My heart was a different size by the time I finished: swollen from the terrible beating it took, but also, I think, permanently augmented.’ -Ned Beauman

"The 'next life' of Atticus Lish’s novel is the one you have to die to know. It’s also the next civilian life of a soldier ravaged by three tours in Iraq, and the dodgy life of an immigrant in the city’s sleepless boroughs. The work is violent, swift, and gloriously descriptive. It is love story and lament, a haunting record of unraveling lives. Lish says starkly and with enormous power: the spirit prevails until it doesn’t. A stunning debut." -Noy Holland, author of Swim for the Little One First

"An illegal Chinese immigrant meets a broken American warrior, and the great love story of the 21st century begins. The intersection of their paths seems inevitable, irrevocable. Their story: tender, violent, terrible, and beautiful. Atticus Lish's prose, lyrical and taut, sentences as exact and indisputable as chemical formulas, is trance-like, evangelical in its ability to convert and convince its reader. Preparation for the Next Life is that rare novel that grabs you by the shirt and slaps you hard in the face. Look, it says. It isn't pretty. Turn away at your own risk. In case you haven't noticed, the American Dream has become a nightmare. Atticus Lish has your wake up call. He has created a new prototype of the hero, and her journey provides us with a devastating perspective on the "promised land" of the post 9/11 U.S., where being detained is a rite of passage and the banality of violence is simply part of the pre-apocalyptic landscape." -Christopher Kennedy, author of Ennui Prophet

"Atticus Lish has written the most relevant, and beautiful, novel of the year." -Scott McClanahan, author of Crapalachia and Hill William

Preparation for the Next Life: Winner of the 2015 PEN/Faulkner Award for Fiction (Paperback)

Book Description Paperback. Condition: New. Language: English. Brand new Book. 'BLISTERING' THE TIMES * 'EXTRAORDINARY' FINANCIAL TIMES *Winner of the New York City Book Award for Fiction* *Finalist for the PEN/Hemingway Award for Fiction* New York Times Best of 2014 Wall Street Journal's Best of 2014 Vanity Fair's Best of 2014 Publishers Weekly's Best of 2014 BuzzFeed's Best of 2014 New York Times 100 Notable Books of 2015 Set in the underbelly of New York, Preparation for the Next Life exposes an America as seen from the fringes of society and, in devastating detail, destroys the myth of the American Dream through two of the most remarkable characters in contemporary fiction. Powerful, realistic and raw, this is one of the most ambitious - and necessary - novels of our time. Seller Inventory # AA99781780748337

Preparation for the Next Life (Paperback)

Book Description Paperback. Condition: new. Paperback. In post-9/11 New York, Zou Lei is an illegal immigrant from northwest China. Forced to work fourteen-hour days and live in squalor, she nevertheless embraces the many freedoms her adopted homeland has to offer. Damaged by three tours in Iraq, veteran Brad Skinner comes to New York with the sole intention of partying as hard as he can in order to forget what he's seen. Impulsive and angry, Skinner's re-entry into civilian life seems doomed. But when he meets Zou Lei they discover that new beginnings may be possible for both of them, that is if they can survive homelessness, lockup and Skinner's post-traumatic stress disorder. Set in the underbelly of New York, Preparation for the Next Life exposes an America as seen from the fringes of society in devastating detail and destroys the myth of the American Dream through two of the most remarkable characters in contemporary fiction. A gut-wrenching love story between an illegal migrant from the Uyghur tribe in Asia and a damaged Iraq veteran set in the underbelly of New York. Shipping may be from multiple locations in the US or from the UK, depending on stock availability. Seller Inventory # 9781780748337

Shipping: US$ 4.82
From United Kingdom to U.S.A.
Destination, rates & speeds

Shipping: US$ 3.62
From United Kingdom to U.S.A.
Destination, rates & speeds

Shipping: US$ 3.62
From United Kingdom to U.S.A.
Destination, rates & speeds

Preparation for the Next Life: Winner of the 2015 PEN/Faulkner Award for Fiction

Shipping: US$ 10.82
From United Kingdom to U.S.A.
Destination, rates & speeds

Book Description Condition: New. 'Punches its way, bare-knuckled, through every millennial New York novel centring around middle-class intellectual characters. but its real target, sought out with a heat-seeking precision, is far weightier, and that is America itself' (Observer) Num Pages: 432 pages. BIC Classification: FA. Category: (G) General (US: Trade). Dimension: 198 x 129 x 30. . . 2016. Paperback. . . . . Books ship from the US and Ireland. Seller Inventory # V9781780748337