Items related to Screening Twilight: Critical Approaches to a Cinematic... 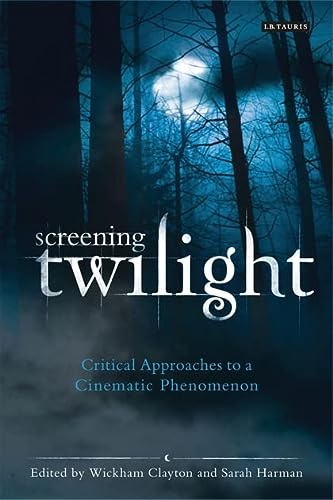 The Twilight Saga, a series of five films adapted from Stephanie Meyer's four novels, has been a sensation, both at the box office and through the attention it has won from its predominantly teenaged fans. As popular cinema, the series has had its share of criticism, even from fans. However, it also offers rich opportunities for critical attention, which the contributors to Screening Twilight provide with energy and style.

The book unpacks how this popular group of films work as cinematic texts, what they have to say about cinema and culture today, and how fans may seek to re-read or subvert these messages. Chapters address Twilight in the context of the vampire and myth, in terms of genre and reception, identity, gender and sexuality, and through re-viewing the series fandom. Screening Twilight is a revelation of how a popular cinematic phenomenon can reward close attention from scholarly, critical writers on cinema and culture.

Sarah Harman is a PhD candidate at Brunel University, UK, working on Femininity, Feminism and Masochism: The Female Masochist Body in Paracinema. She is also Peer Editor for Roehampton University's journal for performance and creative research, 'Activate', as well as for Goldsmiths' Cultural Studies department magazine, 'Nyx, a Noctournal'.

Wickham Clayton's completed PhD thesis for Roehampton University is on the aesthetics of the Friday the 13th film franchise. He has contributed to collections including Tainted Love: Screening Sexual Perversities edited by Donna Peberdy and Darren Kerr (I.B.Tauris, 2012).

'Harman and Clayton have gathered together a dynamic mix of writers who tackle the series in all its complexities [ - ] This book is a must-read.' Stacey Abbott, Reader in Film and Television Studies, University of Roehampton 'Screening Twilight [ - ] examines not only the texts but also how fans and critics have responded to them and it opens up a lively discussion of the cultural significance of this new twist in the vampire tale. In short, this is a terrific book.' Milly Williams, Senior Lecturer in Film and TV Studies, Brunel University

Book Description I B TAURIS Mai 2014, 2014. Taschenbuch. Condition: Neu. Neuware - Screening Twilight unpacks how this popular group of films work as cinematic texts, what they have to say about cinema and culture today, and how fans may seek to re-read or subvert these messages. Englisch. Seller Inventory # 9781780766669