Items related to Netsuke Nation: Tales from Another Japan

Netsuke Nation: Tales from Another Japan 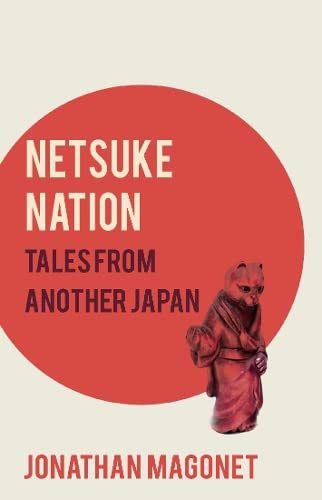 Before Manga captured the imagination of the world, Japanese artists sculpted a miniature society of human and not-quite human characters. These are 'netsuke': tiny figures, threaded by cords, which were used to hold in place the 'purse' that hung from a kimono. Carved from wood, ivory or bone, they formed an exotic society, reflecting the history, culture and fantasy life of Japan. Now, for the first time, their individual stories come to life, and the unfamiliar and often startling nature of their society. Meet Momo, the beautiful but conflicted geisha cat; discover the dreams of the mermaids who worship Esther Williams; witness the rise and fall of a ruthless politician who plays the 'alien' card; encounter the creatures of legend and the demons who star in horror movies; learn the peculiar practices and customs of netsuke sexuality; try to solve the mystery of why netsuke suddenly disappear; admire the heroic quest to create a national orchestra; enjoy the embarrassment of a martial arts struggle gone peculiarly awry; share the hopes of an autumn and spring love story; face the threat to netsuke society of the plastic invasion. This unique work of fiction will appeal to those interested in Japanese culture and whimsical stories. "Inspired by The Hare with Amber Eyes to collect netsuke, I found they offered a fascinating introduction to Japanese culture. On my daily walk to the university in Fukuoka where I was teaching, some character in my small netsuke collection, would suggest a story that fed into an emerging idea of Netsuke Nation, a mixture of imagination and the experience of Japanese life."

Born in 1942, Jonathan Magonet is a medical doctor, rabbi, Bible scholar and poet. Retiring after twenty years as Principal of a rabbinic seminary, the wish to explore a new language and culture led him to Japan. Jonathan now lives in London.

1. Netsuke Nation: Tales from another Japan

2. Netsuke Nation: Tales from Another Japan

3. Netsuke Nation: Tales from another Japan

Book Description Matador, 2013. Paperback. Condition: Good. Good condition is defined as: a copy that has been read but remains in clean condition. All of the pages are intact and the cover is intact and the spine may show signs of wear. The book may have minor markings which are not specifically mentioned. Most items will be dispatched the same or the next working day. Seller Inventory # wbb0012575644