Items related to Good Strategy/Bad Strategy: The difference and why... 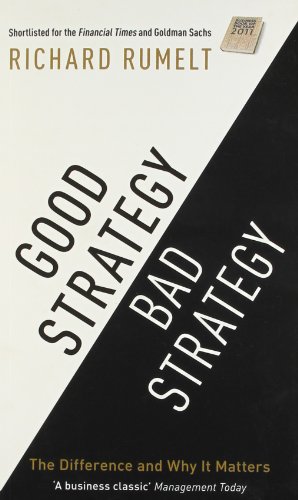 Good Strategy/Bad Strategy clarifies the muddled thinking underlying too many strategies and provides a clear way to create and implement a powerful action-oriented strategy for the real world. Developing and implementing a strategy is the central task of a leader. A good strategy is a specific and coherent response to—and approach for—overcoming the obstacles to progress. A good strategy works by harnessing and applying power where it will have the greatest effect. Yet, Rumelt shows that there has been a growing and unfortunate tendency to equate Mom-and-apple-pie values, fluffy packages of buzzwords, motivational slogans, and financial goals with “strategy.” In Good Strategy/Bad Strategy, he debunks these elements of “bad strategy” and awakens an understanding of the power of a “good strategy.” He introduces nine sources of power—ranging from using leverage to effectively focusing on growth—that are eye-opening yet pragmatic to

Developing and implementing a strategy is the central task of a leader, whether the CEO at a Fortune 100 company, an entrepreneur, a church pastor, the head of a school, or a government official. Richard Rumelt shows that there has been a growing and unfortunate tendency to equate Mom-and-apple-pie values, fluffy packages of buzzwords, motivational slogans, and financial goals with “strategy.” He debunks these elements of “bad strategy” and awakens an understanding of the power of a “good strategy.”

A good strategy is a specific and coherent response to—and approach for overcoming—the obstacles to progress. A good strategy works by harnessing and applying power where it will have the greatest effect in challenges as varied as putting a man on the moon, fighting a war, launching a new product, responding to changing market dynamics, starting a charter school, or setting up a government program. Rumelt’s
nine sources of power—ranging from using leverage to effectively focusing on growth—are eye-opening yet pragmatic tools that can be put to work on Monday morning.

Surprisingly, a good strategy is often unexpected because most organizations don’t have one. Instead, they have “visions,” mistake financial goals for strategy,
and pursue a “dog’s dinner” of conflicting policies and actions.

Rumelt argues that the heart of a good strategy is insight—into the true nature of the situation, into the hidden power in a situation, and into an appropriate response. He shows you how insight can be cultivated with a wide variety of tools for guiding your
own thinking.

Good Strategy/Bad Strategy uses fascinating examples from business, nonprofit, and military affairs to bring its original and pragmatic ideas to life. The detailed examples range from Apple to General Motors, from the two Iraq wars to Afghanistan, from a small local market to Wal-Mart, from Nvidia to Silicon Graphics, from the Getty Trust to the Los Angeles Unified School District, from Cisco Systems to Paccar, and from Global Crossing to the 2007–08 financial crisis.

Reflecting an astonishing grasp and integration of economics, finance, technology, history, and the brilliance and foibles of the human character, Good Strategy/Bad Strategy stems from Rumelt’s decades of digging beyond the superficial to address hard questions with honesty and integrity.

Walter Kiechel is the author of The Lords of Strategy. Until January 2003, Kiechel served as editorial director of HBP and senior vice president in charge of its publishing division, with responsibility for the Harvard Business Review; HBS Press, the company's book-publishing arm; the newsletter unit (which he helped start in 1996) as well as HBP’s video, reprints, and conference businesses

Considering the source, this is a shocking book. For over 40 years Richard Rumelt has made distinguished contributions to the field of strategy, in his theorizing, teaching, and consulting. Now comes the deponent to tell us that what purports to be strategy at most organizations, not just companies but not-for-profits and governments as well, hardly merits the name. Instead it represents what he calls "bad strategy"--a list of blue-sky goals, perhaps, or a fluff-and-buzzword infected "vision" everybody is supposed to share.

Refreshing stuff this, seeing the corporate emperor revealed not in his imagined suit of armor but rather in something resembling a diaphanous clown suit. Rumelt drives the point home with a simple explanation for why most organizations can't do "good strategy": the real McCoy requires making choices, feeding a few promising beasties while goring the oxen of others at the management table.

But the jeremiad, fun as it is--and it is fun, Rumelt has a good time punching holes in the afflatus of bad strategy--isn't my favorite part of the book. That would be the second section, with the slightly daunting title "Sources of Power." To be useful to a practitioner, a book on strategy needs not only a straightforward framework but also a certain craftiness, a set of ideas that prompt the reader to think "What a neat idea" or "How clever of them." Rumelt has the clear, elegant framework in what he calls the "kernel"--a diagnosis explaining the nature of the challenge, a guiding policy for dealing with it, coherent actions for carrying out the policy.

In "Sources of Power," though, he goes deeper than the merely crafty to identify potential levers of for strategic advantage--proximate objectives, design, and focus, among others--that transcend the purely economic. Repeatedly he demonstrates how to think down through the apparent challenge, with questions and then questions of those questions, to get at what can be the bedrock of a good strategy.

In a final section on thinking like a strategist, we get a sense of what a delight it must be to sit in Rumelt's classroom, or with him on a consulting assignment, as he leads us through the best kind of Socratic dialogue to appreciate the kinds of blinders or mass psychology that can pose the final barriers to our forging clear-eyed strategy.

If you want to make strategy, or be an informed part of the ever-evolving conversation around the subject, you will need to read this book. My bet is that you'll enjoy the experience. --Walter Kiechel

RICHARD P. RUMELT is one of the world’s most influential thinkers on strategy and management. The Economist profiled him as one of twenty-five living persons who have had the most influence on management concepts and corporate practice. McKinsey Quarterly described him as being “strategy’s strategist” and as “a giant in the field of strategy.” Throughout his career he has defined the cutting edge of strategy, initiating the systematic economic study of strategy, developing the idea that companies that focus on core skills perform best, and that superior performance is not a matter of being in the right industry but comes from a firm’s individual excellence. He is one of the founders of the resource-based view of strategy, a perspective that breaks with the market-power tradition, explaining performance in terms of unique specialized resources. Richard Rumelt received his doctoral degree from Harvard Business School, holds the Harry and Elsa Kunin Chair at the UCLA Anderson School of Management, and is a consultant to small firms such as the Samuel Goldwyn Company and giants such as Shell International, as well as to organizations in the educational and not-for-profit worlds.

Good Strategy/Bad Strategy: The difference and why it matters (Paperback)

Book Description Paperback. Condition: New. Export/Airside. Language: English. Brand new Book. Even though everyone is talking about it, there is no concept in business today more muddled than 'strategy'. Richard Rumelt, described by McKinsey Quarterly as 'a giant in the field of strategy' and 'strategy's strategist', tackles this problem head-on in a jargon-free explanation of how to develop and take action on strategy, in business, politics and beyond.Rumelt dispels popular misconceptions about strategy - such as confusing it with ambitions, visions or financial goals - by very practically showing that a good strategy focuses on the challenges a business faces, and providing an insightful new approach for overcoming them. His sharp analysis and his brilliant, bold style make his book stand out from its competitors (something that Rumelt himself says is crucial).Rumelt has always challenged dominant thinking, ever since, in 1972, he was the first person to uncover a statistical link between corporate strategy and profitability - and this is his long-awaited tour de force. Seller Inventory # LIB9781781251546

Good Strategy Bad Strategy: The Difference and Why it Matters

Shipping: US$ 20.72
From United Kingdom to U.S.A.
Destination, rates & speeds

Good Strategy Bad Strategy: The Difference and Why it Matters

Good StrategyBad Strategy The difference and why it matters

Shipping: US$ 34.56
From United Kingdom to U.S.A.
Destination, rates & speeds

Good Strategy / Bad Strategy : The difference and why it matters