Items related to Born to Run: The hidden tribe, the ultra-runners, and...

McDougall, Christopher Born to Run: The hidden tribe, the ultra-runners, and the greatest race the world has never seen

Born to Run: The hidden tribe, the ultra-runners, and the greatest race the world has never seen 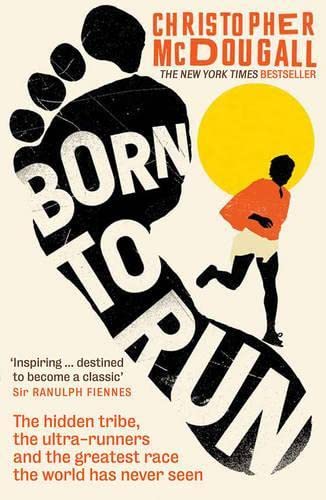 At the heart of Born to Run lies a mysterious tribe of Mexican Indians, the Tarahumara, who live quietly in canyons and are reputed to be the best distance runners in the world; in 1993, one of them, aged fifty-seven, came first in a prestigious 100-mile race wearing a toga and sandals. A small group of the world's top ultra-runners (and the awe-inspiring author) make the treacherous journey into the canyons to try to learn the tribe's secrets and then take them on over a course fifty miles long.With incredible energy and smart observation, McDougall tells this story while asking what the secrets are to being an incredible runner. Travelling to labs at Harvard, Nike and elsewhere, he comes across an extraordinary cast of characters, including the woman who recently broke the world record for 100 miles and for her encore ran a 2:50 marathon in a bikini, pausing to down a beer at the 20 mile mark.

Born to Run is a fascinating and inspiring true adventure story, based on humans pushing themselves to the limits. A brilliantly written account of extraordinary endurance, far from home - that also explains how anyone can run better - it's destined to become a classic. (Ranulph Fiennes)

Chris McDougall runs hundreds of miles across the planet's most hostile terrain with a lost tribe, a zonked-out surfer couple and a barefooted maniac, then tells their amazing story with the narrative skill and gusto of a Carl Hiassen novel. It's quite simply the best book you'll ever read about running, as through the gentle, reclusive super-athletes of the Tarahumara Indians, he connects with its true spirit and offers inarguable evidence that everything the modern runner knows is wrong. There's top-class travel writing, cutting-edge science, and an inspiring tale of endurance -- it's brilliant, and brilliantly life-affirming. (Lloyd Bradley, author, The Rough Guide to Running, former Consultant Editor, Runners’ World and Men’s Health)

Initially, I thought "Me? Read a book on running?" Then suddenly - wham! - I was drawn in, galloping along through a multi-faceted landscape that is by turns exhilarating, funny and weirdly absorbing. It's been a breathless read, but sheer endorphinous pleasure. (John Gimlette, author of At the Tomb of the Inflatable Pig)

Driven by an intense yet subtle curiosity, Christopher McDougall gamely treads across the continent to pierce the soul and science of long-distance running. McDougall's ambitious search leads him deep into the ragged folds of Mexico's Copper Canyon, where he somehow manages the impossible: he plumbs the mystic secrets of the fleet-footed Tarahumara Indians while never losing his deep enchantment for the majesty of their culture. (Hampton Sides, author of Blood and Thunder and Ghost Soldiers)

Wonderful. It's funny, insightful, captivating, and a great and beautiful discovery. There are lessons that translate to realms beyond running. The book inspires anyone who seeks to live more fully or to run faster. I just loved this book. (Lynne Cox, author of Swimming to Antarctica)

Hilariously funny, weird, and nonstop fun to read; runners can sink their teeth into this tall tale (Bill Rodgers, former American record holder in the marathon)

McDougall has written not just a classic book for runners but for anyone who has ever dreamt of venturing beyond one's comfort zone. In ultrarunners he uncovers a tribe worthy of the pioneering drifters that fired the American spirit, and in McDougall ultrarunners have found their own Kerouac or Krakauer. (Tim Butcher, author of BLOOD RIVER)

His prose is light and airy, informative without being pretentious ... [McDougall] offers insightful sidebars on a variety of topics, from the development of the modern running shoe to an evolutionary argument that humans are literally "born to run." A terrific ride, recommended for any athlete. (Kirkus (Starred Review))

Hugely entertaining ... this is one of the most joyful and engaging books about running to appear for many years (Irish Times)

This is the BEST book on running I've ever read (Shankara Smith, manager, Run and Become)

Equal parts quest, physiology treatise, and running history ... [McDougall] seeks to learn the secrets of the Tarahumara the old-fashioned way: He tracks them down ... The climactic race reads like a sprint ... It simply makes you want to run. (Outside Magazine)

Christopher McDougall writes like a world-class ultramarathoner, with so much ease and heart and gusto that I couldn't stop reading this thrilling, fascinating book. As soon as I finished, all I wanted to do was head out for a run. (Benjamin Wallace, author of The Billionaire’s Vinegar)

Exhilarating (Richard Askwith, author of Feet in the Clouds: A Tale of Fell-Running and Obsession)

A bible for the barefoot running community (Ben Fogle)

Like an energy-drinking Carlos Castaneda ... McDougall creates a fascinating portrait of a truly egalitarian and beautiful race, one that has removed itself from the corporate spectre of the modern world and all its collected idiocies. Recommended for sports and non-sports fans alike (Paul Dale The List)

This is, quite simply, the best book on sport I have ever read. (Bruce Elder Sydney Morning Herald 2009-06-27)

McDougall ... reaches the state of bliss that runners, or so we're told, very occasionally experience in the midst of an endless run (Simon Kuper Financial Times)

It's a great book ... a really gripping read ... unbelievable story ... a really phenomenal book ... you should really pick it up if you can (Jon Stewart The Daily Show)

A ripping read for runners, as well as anyone who likes a great story about extraordinary people and what makes them tick (Witness, South Africa 2009-07-15)

Enlightening and beautifully told, this tale makes you want to grab your running shoes and push yourself a little further (You Magazine, South Africa 2010-02-11)

"A brilliantly written account of extraordinary endurance - it's destined to become a classic."