Items related to The Old Man and the Sea

Hemingway, Ernest The Old Man and the Sea 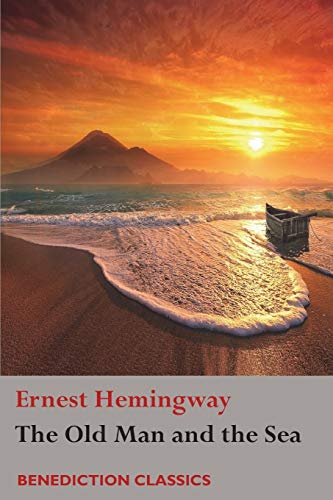 The Old Man and the Sea, an apparently simple fable, represents the mature Hemingway at his best.   He was awarded the Nobel Prize for Literature soon after its publication, and half a century later it is still one of his most read books.

Here, for a change, is a fish tale that actually does honor to the author. In fact The Old Man and the Sea revived Ernest Hemingway's career, which was foundering under the weight of such postwar stinkers as Across the River and into the Trees. It also led directly to his receipt of the Nobel Prize in 1954 (an award Hemingway gladly accepted, despite his earlier observation that "no son of a bitch that ever won the Nobel Prize ever wrote anything worth reading afterwards"). A half century later, it's still easy to see why. This tale of an aged Cuban fisherman going head-to-head (or hand-to-fin) with a magnificent marlin encapsulates Hemingway's favorite motifs of physical and moral challenge. Yet Santiago is too old and infirm to partake of the gun-toting machismo that disfigured much of the author's later work: "The brown blotches of the benevolent skin cancer the sun brings from its reflection on the tropic sea were on his cheeks. The blotches ran well down the sides of his face and his hands had the deep-creased scars from handling heavy fish on the cords." Hemingway's style, too, reverts to those superb snapshots of perception that won him his initial fame:

Just before it was dark, as they passed a great island of Sargasso weed that heaved and swung in the light sea as though the ocean were making love with something under a yellow blanket, his small line was taken by a dolphin. He saw it first when it jumped in the air, true gold in the last of the sun and bending and flapping wildly in the air.

If a younger Hemingway had written this novella, Santiago most likely would have towed the enormous fish back to port and posed for a triumphal photograph--just as the author delighted in doing, circa 1935. Instead his prize gets devoured by a school of sharks. Returning with little more than a skeleton, he takes to his bed and, in the very last line, cements his identification with his creator: "The old man was dreaming about the lions." Perhaps there's some allegory of art and experience floating around in there somewhere--but The Old Man and the Sea was, in any case, the last great catch of Hemingway's career. --James Marcus From the Publisher:

The Old Man and the Sea (Paperback)

Book Description Paperback. Condition: New. Language: English. Brand new Book. "His best. Time may show it to be the best single piece of any of us, I mean his and my contemporaries." - William Faulkner.The Old Man and the Sea, an apparently simple fable, represents the mature Hemingway at his best, and it is still one of his most read books. In 1954 Hemingway was awarded the Nobel Prize for Literature "for his mastery of the art of narrative, most recently demonstrated in The Old Man and the Sea, and for the influence that he has exerted on contemporary style."Hemingway's style was famously simple. In responding to a critic, he said "Does he really think big emotions come from big words? He thinks I don't know the ten-dollar words. I know them all right. But there are older and simpler and better words, and those are the ones I use." Using these simpler and better words he tells the unforgettable story of Santiago, an old Cuban fisherman down on his luck, who goes out alone far from the shore in search of one last victory and catches a huge marlin longer than his boat. He is tested to the very limits of his skill and strength and returns "destroyed but not defeated." This, of course, also refers to Hemingway, who, in his last years, was in constant pain from years of adventures and accidents but still able to do his best work. A classic novella that can be read in a single sitting.Ernest Miller Hemingway (1899-1961) was an American journalist, novelist, short-story writer, and sportsman. He loved Cuba, where he had a home, and where he placed his Nobel Prize medal in the custody of the Catholic Church for the benefit of the local people. His economical and understated style-which he termed the iceberg theory-has had a strong influence on twentieth-century fiction. Many of his books are considered classics of American literature. Writer Richard Ford calls Fitzgerald, Hemingway and Faulkner "the Three Kings who set the measure for every writer since.". Seller Inventory # AAV9781781396803

The Old Man and the Sea (Paperback or Softback)

Shipping: US$ 7.97
From United Kingdom to U.S.A.
Destination, rates & speeds