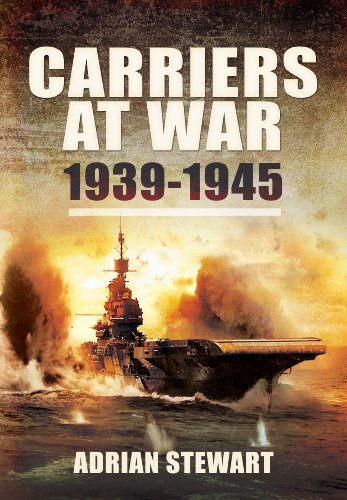 The Author begins this fascinating book by tracing aircraft carrier development between the Wars. Eschewed by the Germans and Italians and with Britain squandering her early lead, the Americans and Japanese became front-runners.

The Royal Navy learnt the hard way in the early stages of WW2 with the loss of HMS Courageous and Glorious but, following successes at Taranto and Matapan, the value of carriers was no longer in doubt. The sinking of Bismarck and the cataclysmic Pearl Harbor attack signaled the end of the Battleship era. Stung by such spectacular losses the US Navy threw its weight behind the carrier concept and the naval war in the Pacific (Guadalcanal, East Solomon Islands, Santa Cruz, Midmay and Leyte Gulf) revolved round carrier-borne aircraft.

Meanwhile the carrier became pivotal in protecting vital convoys in the Atlantic, Arctic and Mediterranean. The author backs his arguments with copious examples of naval and air action.

Adrian Stewart was educated at Rugby School before taking First Class Honours at Caius College, Cambridge. His previously published works with Pen and Sword Books include: Eighth Army’s Greatest Victories, Early Battles of Eighth Army, They Flew Hurricanes, The Campaigns of Alexander of Tunis 1940-1945, February 1942 – Britain’s Darkest Days, Carriers at War, Six of Monty’s Men and Ten Squadrons of Hurricanes (2015) have all been published by Pen and Sword Books. He lives near Rugby.

Based on secondary sources, but well-written in sparkling style, 'carriers at War' is an excellent addition to the bibliography- and very useful primer on the subject of naval aviation. -Warships International Fleet Review In this hugely informative and interesting analysis of sea power in war, Stewart, a respected military, naval and aviation historian, backs up his arguments and enlivens the narrative with copious and stirring accounts of historic naval and air actions. Scale Military Modelling Monthly

Shipping: US$ 19.62
From United Kingdom to U.S.A.
Destination, rates & speeds

Shipping: US$ 25.93
From Netherlands to U.S.A.
Destination, rates & speeds