FOGDEN/TAYLOR Hummingbirds A Life-Size Guide to Every Species /anglais

Hummingbirds A Life-Size Guide to Every Species /anglais 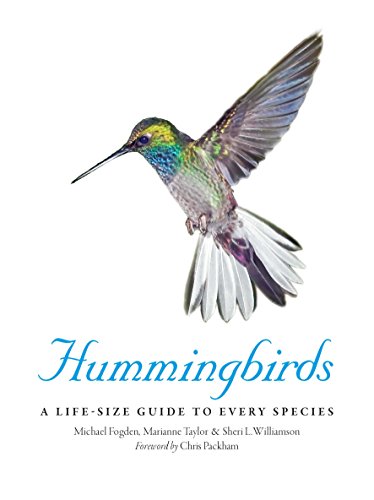 Marianne Taylor is a freelance writer, illustrator, photographer, and editor. Her interest in natural history began at an extremely early age, as she became passionately interested in first butterflies and then birds. The daughter of two librarians, one of whom later became a secondhand bookseller, Marianne was as bookish as she was bird-obsessed. She worked for seven years in natural history publishing, first for bird book publisher Christopher Helm, and later for Birdwatch magazine. Her particular interest in owls and other birds of prey was fueled by a brief but unforgettable adventure in 2005, when she joined bird ringers studying Ural, Tengmalm’s, and Eagle owls in the forests of Sweden. She began a new career as a writer in 2007, and since then has written more than a dozen books for adults and children on a range of natural history subjects. Her previous work includes RSPB British Birds of Prey, Beautiful Owls, and Owls.

1. Hummingbirds: A Life-Size Guide to Every Species [Paperback] Fogden, Michael and Taylor, Marianne

Shipping: US$ 28.22
From United Kingdom to U.S.A.
Destination, rates & speeds

2. Hummingbirds A Life-Size Guide to Every Species /anglais

Book Description Condition: Good. A+ Customer service! Satisfaction Guaranteed! Book is in Used-Good condition. Pages and cover are clean and intact. Used items may not include supplementary materials such as CDs or access codes. May show signs of minor shelf wear and contain limited notes and highlighting. Seller Inventory # 1782404228-2-4