Items related to Beneath (KelpiesTeen) 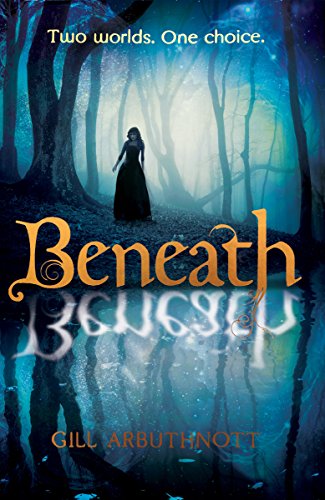 'She plunged beneath the surface, her eyes blind in the murky, green water: dived again and again until she couldn't take another breath. There was no trace. Freya was gone.'

Jess has heard the rumors, old folk tales of creatures that live beneath the water: dangerous shapeshifters with a taste for human children. She's dismissed them as crazy stories -- until her best friend is stolen and Jess discovers all the legends are true...

Trying to rescue her friend, she meets one of them -- a kelpie -- but he turns out to be nothing like she imagined.

Caught between two worlds, between kelpies and humans, and between mysterious Finn and brave Magnus, Jess must chose between what she's always known -- and what lies beneath.

Gill Arbuthnott was born and brought up in Edinburgh, but escaped briefly to study in St Andrews and Southampton. She couldn't stay away, however, and now lives in Edinburgh with A former biology teacher, she has written several novels for younger children: The Chaos Clock, The Chaos Quest, Dark Spell and Winterbringers (all Floris Books), as well as books with Barrington Stoke and The Keepers Daughter, published by Chicken House.

Gr 6–9—A tale in which a paranormal-stalker becomes paranormal-love-interest, this novel tracks 16th-century farm girl Jess through her discovery of the world of the Kelpies, which has been carefully concealed by her townsfolk for years. Finn, a Kelpie, has been coming to the human world to keep an eye on the wolves that escape from his realm to the world above, as well as to watch Jess obsessively. He makes the decision to steal her away to his world forever, but in his haste, he takes her friend Freya. After failing to get anyone to believe her story of Freya's disappearance, Jess captures Finn and enters the Kelpie world on her own. After she ensures Freya's safe return, and in spite of the circumstances, Jess continues to think about Finn. She becomes caught in a love triangle between the slightly dangerous and forbidden feelings she has for Finn and the safe and comforting love she feels for Freya's strapping cousin, Magnus. Things become more complicated when the binding that keeps the wolves from the Kelpie world out of the human one wears off and the two groups must work together to avoid disaster. While the plot has exciting moments, the character development is minimal and it's hard to understand why Finn and Magnus are so taken with Jess. Her choice between the two ultimately seems tacked on, and the story feels somewhat unfinished. While Beneath may appeal to burgeoning paranormal romance readers, it is recommended as an additional purchase.—Joanna Sondheim, Columbia Grammar & Preparatory School, New York City

Shipping: FREE
From Ireland to U.S.A.

Book Description Kelpies. Condition: New. Jess is caught between two worlds, between kelpies and humans, and between Finn and Magnus. Who will she choose in this dark fantasy adventure? Series: Kelpiesteen. Num Pages: 288 pages. BIC Classification: 5AM; YFCB. Category: (Y) Teenage / Young Adult. Dimension: 196 x 132 x 21. Weight in Grams: 266. . 2014. Paperback. . . . . Books ship from the US and Ireland. Seller Inventory # KRA0003810

Book Description 2014. Paperback. Condition: New. Paperback. 'She plunged beneath the surface, her eyes blind in the murky, green water: dived again and again until she couldn't take another breath. There was no trace. Freya was gone.'Jess has heard.Shipping may be from multiple locations in the US or from the UK, depending on stock availability. 288 pages. 0.262. Seller Inventory # 9781782500520

Book Description 2014. Paperback. Condition: New. Paperback. 'She plunged beneath the surface, her eyes blind in the murky, green water: dived again and again until she couldn't take another breath. There was no trace. Freya was gone.'J.Shipping may be from our Sydney, NSW warehouse or from our UK or US warehouse, depending on stock availability. 288 pages. 0.262. Seller Inventory # 9781782500520