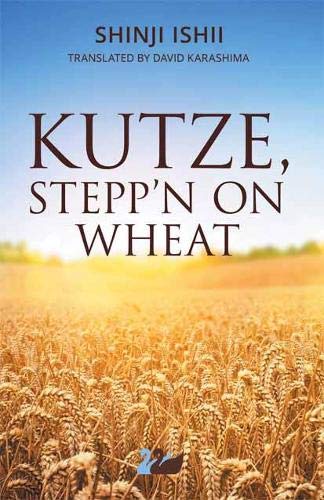 Alone on a midsummer night, Cat wakes to find a stranger dressed in yellow ‘rat-a-tap, tapping’ his feet. Captivated by the music of Kutze’s steps, Cat resolves to travel abroad and tread wheat alongside this stranger when he becomes an adult. But first, Cat must grow up in the small port town where he lives with his timpanist grandfather and a father obsessed with an unsolved mathematical proof, and which, as part of the series of increasingly surreal events that characterize his life, Cat rescues from a plague of rats by his curious ability to imitate cats’ yowls. The ‘rat-a-tap, tap’ of Kutze’s step echoes through Cat’s life as he matures, moves away from the town to become a musician in the big city and, eventually, journeys further afield, across the sea.

Shinji Ishii has written over twenty books spanning both fiction and non-fiction genres. Since publishing his critically acclaimed debut novel ‘Once Upon a Swing’ in 2000, Ishii has been shortlisted for the Mishima Yukio Prize four times and received the Tsubota Joji Literature Award in 2003 for ‘Stepp’n on Wheat’.

David Karashima served as director of the first Tokyo International Literary Festival in 2013, and also promotes Japanese literature in his position as manager of international projects at Read Japan. He has previously published translations from writers including Hitomi Kanehara and Takeshi Kitano.