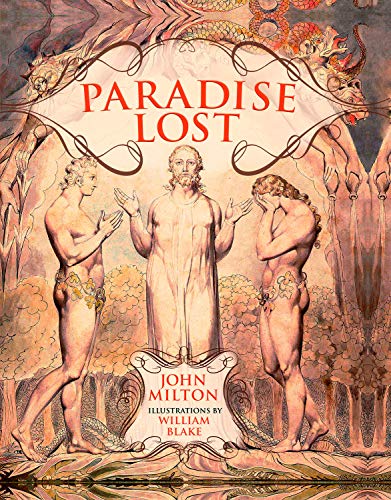 In his epic work Paradise Lost, John Milton seeks "to justify the ways of God to men" through the familiar Christian story of the fall from grace. The poem is imbued with Milton's profoundly individual view of man's place in the universe and his intellectual and spiritual quest for redemption in the face of despair.

Since its creation Paradise Lost has provided inspiration for generations of writers, from the Romantic poets to Tolkien and, most recently, Philip Pullman in His Dark Materials trilogy. Countless generations of ordinary readers have similarly had their understanding of the darker nature of the human soul illuminated by this remarkable work.

In this edition the poem is presented with all 12 magnificent illustrations produced by William Blake specially for the work.

John Milton was born on 9 December 1608, in Cheapside, London, and attended the University of Cambridge from 1625 to 1632 with the aim of becoming an Anglican priest. He embarked on the Grand Tour of Europe, during which he met the astronomer Galileo, who was under house arrest in Arcetri near Florence. As Civil War loomed in England, new ideas were dangerous in those turbulent times, and Milton embraced them all. Earning his living as a schoolteacher and pamphleteer, he was considered a dangerous radical and heretic by many. After Puritan victory in the Civil War, he became an official spokesman for Oliver Cromwell and, as history see-sawed back towards the status quo, he was imprisoned briefly following the Restoration. Milton lost the battle to save his eyesight in 1652 and had to dictate the first edition of Paradise Lost ?to "helpers" between 1658 and 1664. Having survived the Great Plague of London, he died in 1674, impoverished but famous across Europe as a man of letters.

William Blake (1757-1827) was a leading English poet and painter. Stifled by the confines of traditional education, he expressed himself through his art. Inspired by the painters of the Italian Renaissance, Blake turned his hand to illustrating John Milton's epic poem.