Items related to Soldier Five: The Real Truth about the Bravo Two Zero... 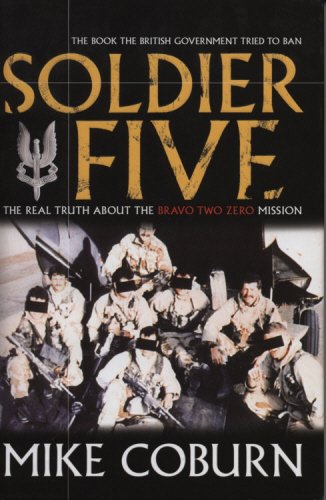 "Soldier Five" is an elite soldier's memoir of his time within the Special Air Service (SAS) and, in particular, his experiences during the 1991 Gulf War. As a member of the Special Forces patrol now famously known by its call sign Bravo Two Zero, he and seven others were inserted hundreds of kilometres behind enemy lines. Their mission was to reconnoitre targets, undertake surveillance of Scud missile sites and sabotage Iraqi communications links, but was to end in desperate failure. From the outset the patrol was dogged by problems that contributed both directly and indirectly to the demise of the mission. The patrol's compromise, and subsequent attempts to evade Iraqi troops, resulted in four members of Bravo Two Zero being captured and a further three killed. One escaped. But the story goes further than the Gulf War itself. Despite numerous books, films and articles on the same subject, the British Government has done its utmost to thwart the release of "Soldier Five", at one stage claiming the book in its entirety was confidential. A campaign of harassment that took some four-and-a-half years of litigation to resolve has now resulted in this publication. "Soldier Five" is a suspenseful account of one man's experiences as a Special Forces soldier. Revealing his conflicts, loyalties and relationships forged, it is the resolution of a soldier's determined fight to see his story told.

Mike Coburn was born in New Zealand but now lives in Australia with his wife and children.