Items related to Stardust: Being a Romance Within the Realms of Faerie

Gailman, Neil Stardust: Being a Romance Within the Realms of Faerie

Stardust: Being a Romance Within the Realms of Faerie 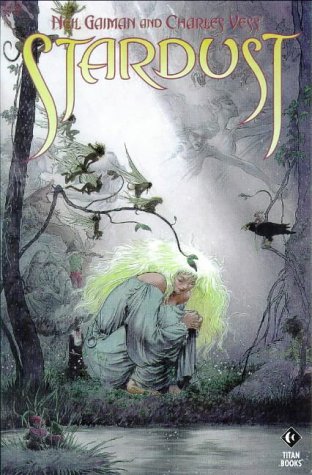 Tristan has lost his heart to the cool, distant Victoria, and in order to win her hand, he vows to retrieve a star they saw falling from the sky. To do this, he must go over an ancient wall, and is propelled into a world that is dangerous and strange beyond imagining. From the author of NEVERWHERE and GOOD OMENS.

Stardust is an utterly charming fairy tale in the tradition of The Princess Bride and The Neverending Story. Neil Gaiman, creator of the darkly elegant Sandman comics and author of The Day I Swapped My Dad for Two Goldfish, tells the story of young Tristran Thorn and his adventures in the land of Faerie. One fateful night, Tristran promises his beloved that he will retrieve a fallen star for her from beyond the Wall that stands between their rural English town (called, appropriately, Wall) and the Faerie realm. No one ever ventures beyond the Wall except to attend an enchanted flea market that is held every nine years (and during which, unbeknownst to him, Tristran was conceived). But Tristran bravely sets out to fetch the fallen star and thus win the hand of his love. His adventures in the magical land will keep you turning pages as fast as you can--he and the star escape evil old witches, deadly clutching trees, goblin press-gangs, and the scheming sons of the dead Lord of Stormhold. The story is by turns thrillingly scary and very funny. You'll love goofy, earnest Tristran and the talking animals, gnomes, magic trees, and other irresistible denizens of Faerie that he encounters in his travels. Stardust is a perfect read-aloud book, a brand-new fairy tale you'll want to share with a kid, or maybe hoard for yourself. (If you read it to kids, watch out for a couple of spicy sex bits and one epithet.) --Therese Littleton

You have to believe. Otherwise, it will never happen.

Tristran Thorn promises to bring back a fallen star for his beloved, the hauntingly beautiful Victoria Forester--and crosses the wall that divides his English country town from another, more dangerous world of lords and witches, all of them in search of the star. Rich with adventure and magic, Stardust is one of master storyteller Neil Gaiman's most beloved tales.