Jordan, Robert; Patterson, Teresa The World of Robert Jordan's The Wheel of Time

The World of Robert Jordan's The Wheel of Time 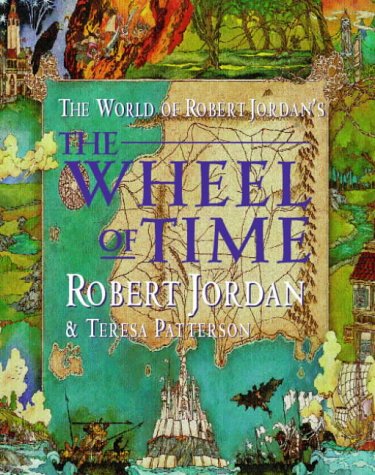 Since the debut of Robert Jordan's internationally bestselling series in 1990, The Wheel of Time has transported readers to a world so strikingly real, so rich in detail and complexity, it seems to rise from memory rather than a printed page. This essential companion to The Wheel of Time is for the millions interested in the history and the background of this incredible series-never-before-told legends, previously unknown peoples and lands, exotic beasts, and portents of what may come to pass.

With more than seventy new full-color paintings that include stunning new world maps, portraits of the central characters, landscapes, objects of Power, and national flags, this comprehensive guide is indispensable to any Robert Jordan fan

"The Wheel of Time turns, and Ages come and pass, leaving memories that become legend. Legend fades to myth, and even myth is long forgotten when the Age that gave it birth comes again." Jordan's Wheel of Time series has uncountable fans, and those who are looking for an encyclopedic history and mythology of Rand al'Thor's world will enjoy this work, which fills in background rather than furthering the story. Also included are double-page spreads of Darrell K. Sweet's seven book jackets for the series.

Teresa Patterson is the author of The World of Shannara with Terry Brooks. She lives in Fort Worth, Texas.

The World of Robert Jordan's The Wheel of Time

Book Description Condition: Good. A+ Customer service! Satisfaction Guaranteed! Book is in Used-Good condition. Pages and cover are clean and intact. Used items may not include supplementary materials such as CDs or access codes. May show signs of minor shelf wear and contain limited notes and highlighting. Seller Inventory # 1841490547-2-4