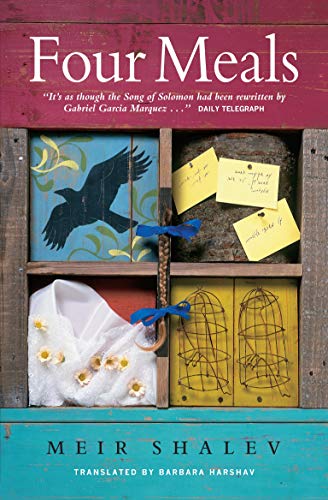 From the author of the critically acclaimed A Pigeon and a Boy, the extraordinary story of Zayde, his enigmatic mother Judith, and her three lovers

When Judith arrives in a small, rural village in Palestine in the early 1930s, three men compete for her attention: Globerman, the cunning, coarse cattle-dealer who loves women, money, and flesh; Jacob, owner of hundreds of canaries and host to the four meals which lend the book its narrative structure; and Moshe, a widowed farmer obsessed with his dead wife and his lost braid of hair which his mother cut off in childhood. During the four meals, which take place over several decades, Zayde slowly comes to understand why these three men consider him their son and why all three participate in raising him. A virtuoso performance of spellbinding storytelling, this is a deeply satisfying read—sensuous, hilarious, compassionate, and profound.

Television host and journalist Meir Shalev is one of Israel's most celebrated novelists. His other books include The Blue Mountain and A Pigeon and a Boy, for which he won the Brenner Prize, Israel's highest literary recognition. Barbara Harshav teaches translation at Yale University. Her translations include American Yiddish Poetry, Esau, The Last Jew, and Night Train to Lisbon.

"Told in a euphonic voice and employing the magic conventions of a fairytale, this is a heartwarming narrative agleam with moments of plangent sadness, rueful humor and compassionate insight."  —Publishers Weekly

"The village mythologizing and the proverbs . . . will warm the hearts of many."  —Kirkus Reviews

"As though the Song of Solomon had been rewritten by Gabriel Garcia Marquez . . . a master class in the storyteller's art."  —Daily Telegraph