Items related to Dealers of Lightning: Xerox Parc and the Dawn of the...

Hiltzik, Michael Dealers of Lightning: Xerox Parc and the Dawn of the Computer Age

Dealers of Lightning: Xerox Parc and the Dawn of the Computer Age 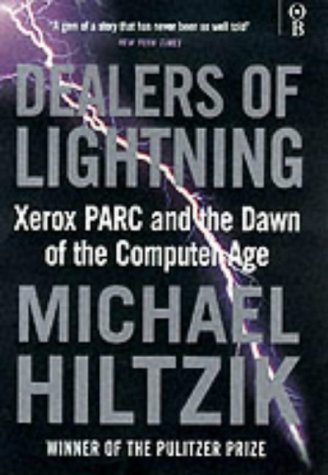 During the 1970s and 1980s, a number of brilliant computer eccentrics were thrown together by Xerox at the Xerox PARC centre in Palo Alto, California. These people created inventions such as the first personal computer, the graphic user interface, the mouse and one of the precursors of the Internet. However, the bosses at Xerox never really appreciated these men or their innovations, and accused them of just fooling around. Then along came the outsiders, such as Steve Jobs of Apple Computing, who left the PARC with ideas that they would later exploit and make vast fortunes on, propelling them to the cutting edge of technology. This book offers a glimpse of business and technology. It is a story of missed opportunities, but also one that marks the dawn of the computer age.

Throughout the '70s and '80s, Xerox Corporation provided unlimited funding to a renegade think tank called the Palo Alto Research Center (PARC). Occupying a ramshackle building adjacent to Stanford University, PARC's occupants would prove to be the greatest gathering of computer talent ever assembled: it conceptualized the very notion of the desktop computer, long before IBM launched its PC, and it laid the foundation for Microsoft Windows with a prototype graphical user interface of icons and layered screens. Even the technology that makes it possible for these words to appear on the screen can trace its roots to Xerox's eccentric band of innovators. But despite PARC's many industry-altering breakthroughs, Xerox failed ever to grasp the financial potential of such achievements. And while Xerox's inability to capitalize upon some of the world's most important technological advancements makes for an interesting enough story, Los Angeles Times correspondent Michael Hiltzik focuses instead on the inventions and the inventors themselves. We meet fiery ringleader Bob Taylor, a preacher's son from Texas known as much for his ego as for his uncanny leadership; we trace the term "personal computer" back to Alan Kay, a visionary who dreamed of a machine small enough to tuck under the arm; and we learn how PARC's farsighted principles led to collaborative brilliance. Hiltzik's consummate account of this burgeoning era won't improve Xerox's stake in the computer industry by much, but it should at least give credit where credit is due. Recommended. --Rob McDonald

Michael A. Hiltzik is a Pulitzer Prize-winning columnist for the Los Angeles Times. In 2004 he won a Gerald Loeb Award, the highest honor in American financial journalism. Hiltzik is the author of Dealers of Lightning: Xerox Parc and the Dawn of the Computer Age and A Death in Kenya. He lives in Southern California with his wife and two sons.

Dealers of Lightning: Xerox Parc and the Dawn of the Computer Age

Shipping: US$ 12.06
From United Kingdom to U.S.A.
Destination, rates & speeds