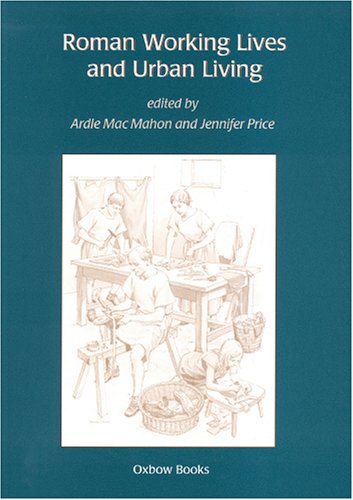 The ordinary people who made up the largest section of the population in the cities and towns in the Roman world were largely ignored by contemporary writers and have often been marginalized in traditional studies of Roman urbanism, but research into their patterns of work and social interaction have increased markedly in recent years. This book has come out of a conference on 'Roman Working Lives and Urban Living' held at the University of Durham in 2001. The conference was planned as a forum for people researching urban space and architecture, commercial and retail structures, organization of craft activity and social theory. The twelve papers presented here have been organized into two categories: Urban living and the settings for working lives and People at work: Owners, and artisans, crafts and professions . The range of topics and variety of approaches in the papers emphasize the wealth of the material available, and it is hoped that this will stimulate further research into the lives of the 'silent voices' of Roman urban society.

Urban Living and the Settings for Working Lives
Beating the bounds: Ritual and the articulation of urban space in Roman Britain (Simon Esmonde Cleary)
Domestic architecture and social discourse in Roman towns (Dominic Perring)
The commercial landscape of Ostia (Janet DeLaine)
The shops and workshops of Roman Britain (Ardle Mac Mahon)
The taberna counters of Pompeii and Herculaneum (Ardle Mac Mahon)
People at Work: Owners and Artisans, Crafts and Professions
Re-thinking the social organisation of trade and industry in first century AD Pompeii (Damian Robinson)
Of lumberjacks and brick stamps: Working with the Tiber as infrastructure (Shawn Graham)
The shopkeepers and craft-workers of Roman London (Jenny Hall)
Pottery in urban Romano-British life (Jeremy Evans)
Glass-working and glassworkers in cities and towns (Jennifer Price)
How many lives depended on plants? Specialisation and agricultural production at Pompeii (Mariana Ciaraldi)
The role of doctors in the city (Ralph Jackson)

Jennifer Price is Emeritus Professor of Roman Provincial Archaeology at Durham University, UK. Her PhD in Archaeology from Cardiff University, UK was on Roman glass in Spain and she has longstanding research interests in Roman and early Medieval glass from archaeological sites in western Europe and the Mediterranean region.

I am very enthusiastic about this volume. The book is worthwhile and a great joy to read. It also offers a great deal of useful information.' (J A S M Bosman PalArch, 2006)

The editors have indeed succeeded in marshalling papers which present a wide range of material relating to this topic, both archaeological and literary.' (Andrew Gardner Journal of Hellenic Studies, 2006)

This collection of essays takes the reader beyond the usual discussions of everyday life in Rome... neatly edited and amply illustrated.' (F. A. R. Greenland Ancient West & East, Vol 8, 2009)