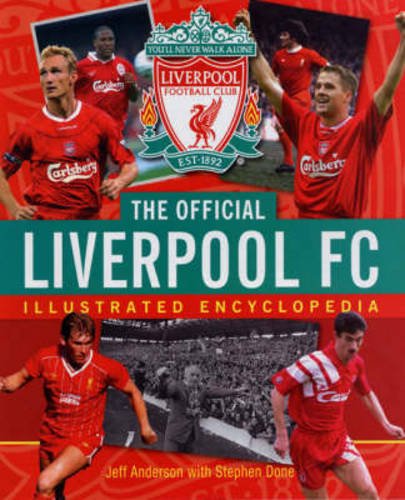 League champions 18 times, FA Cup-winners six times and League Cup-winners six times: in Europe: UEFA Cup-winners four times and European Cup-winners four times. It's a record that makes Liverpool the most successful English Club. From A to Z, The Official Liverpool FC Illustrated Encyclopedia chronicles the highs and lows of LFC's stunning story and serves as an unequalled source of reference. From Alan A'Court and the Academy through to Christian Ziege, not forgetting the Beatles, Kenny Dalglish, Gerard Houllier, Yosser Hughes, Kevin Keegan, the Liver Bird, Michael Owen, Ian Rush, Abel Xavier and everyone else in between, this is a comprehensive alphabetical journey through over a century of sporting heroics set against the backdrop of life on Merseyside. But most importantly it is a story of incredible passion and pride. For Liverpool Football Club somehow manages to inspire not only its own fans, but also followers of football the world over. For millions, Liverpool Football Club is a special place and this is its own special story.

Jeff Anderson is Controller of Current Affairs & Features at Granada Television. He writes frequently for magazines and is co-author of Troubleshooter. Born in Kirkby, Jeff now lives in Heswall on the Wirral, with his wife and children. A lifelong fan of Liverpool FC, he attended his first match in 1968. He was at the 1974 FA Cup final against Newcastle - and has attended all of Liverpool's domestic and European finals since. Stephen Done is curator of Liverpool FC's museum and archive.

Book Description Carlton Books Ltd, 2003. Hardcover. Condition: Used; Good. **SHIPPED FROM UK** We believe you will be completely satisfied with our quick and reliable service. All orders are dispatched as swiftly as possible! Buy with confidence!. Seller Inventory # mon0001239550

Book Description Carlton Books Ltd 15/09/2003, 2003. Condition: Good. Will be shipped promptly from UK warehouse. Book is in good condition with no missing pages, no damage or soiling and tight spine. There may be some dog-eared pages showing previous use but overall a great book. Seller Inventory # 9053-9781842229507

Book Description -. Hardcover. Condition: Very Good. The Official Liverpool FC Illustrated Encyclopedia This book is in very good condition and will be shipped within 24 hours of ordering. The cover may have some limited signs of wear but the pages are clean, intact and the spine remains undamaged. This book has clearly been well maintained and looked after thus far. Money back guarantee if you are not satisfied. See all our books here, order more than 1 book and get discounted shipping. Seller Inventory # 7719-9781842229507

Book Description Hardback. Condition: Very Good. The book has been read, but is in excellent condition. Pages are intact and not marred by notes or highlighting. The spine remains undamaged. Seller Inventory # GOR001355601

Book Description Hardback. Condition: Good. The book has been read but remains in clean condition. All pages are intact and the cover is intact. Some minor wear to the spine. Seller Inventory # GOR001720845