Items related to Pel And The Bombers (5) (Inspector Pel)

Pel And The Bombers (5) (Inspector Pel) 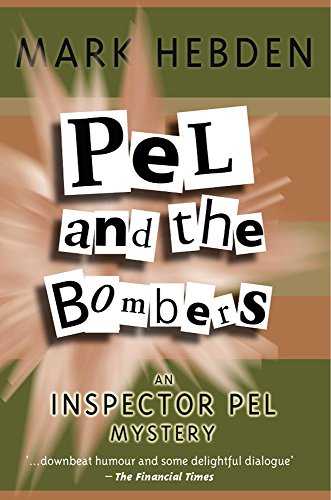 When five murders disturb his sleepy Burgundian city on Bastille night, Chief Inspector Evariste Clovis Desiré Pel has his work cut out for him. A terrorist group is at work and the President is due shortly on a State visit. Pel's problems with his tyrannical landlady must be put aside whilst he catches the criminals.

John Harris, who also wrote under the pen names of 'Mark Hebden' and 'Max Hennessy', was born in 1916. He authored the best-selling and later filmed 'The Sea Shall Not Have Them', a story of survival and rescue from World War II which continues to be periodically screened on TV. He was a sailor, an airman, a journalist, a travel courier, a cartoonist and a history teacher. During the War Harris managed to serve with two air forces and two navies. After turning to full-time writing, he wrote adventure stories, war novels, political thrillers, and also created a sequence of crime novels around the quirky French Chief Inspector Pel, centred primarily in Burgundy, but occasionally Paris and elsewhere. Harris was unusually versatile and wide ranging as an author. Epics such as 'China Seas', which deals with human tragedy, war and revolution in an authentic historical setting, and the three trilogies written under the pseudonym Max Hennessy - one of which, the Kelly Maguire series commencing with 'Lion at Sea' is reckoned to be amongst the finest modern war-at-sea stories written - along with African adventure novels, wide-ranging crime, mysteries and historical fiction, all guarantee a whole library of diverse and entertaining reading full of dry wit and gripping prose.

1. Pel And The Bombers (Inspector Pel)

Book Description Paperback. Condition: Very Good. The book has been read, but is in excellent condition. Pages are intact and not marred by notes or highlighting. The spine remains undamaged. Seller Inventory # GOR002689678