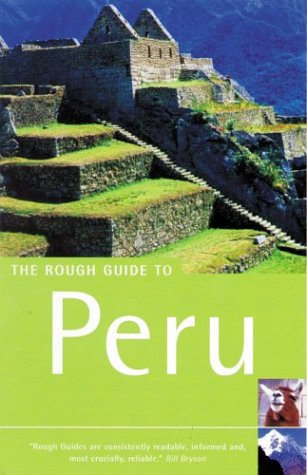 The Rough Guide to Peru is the ultimate guide to one of the most thrilling countries in South America. It includes comprehensive coverage of Peru''s great sights from the soaring Inca citadel of Machu Picchu to the high altitude Central Railway. There are incisive reviews of all the best places to stay, eat and drink, plus the lowdown on some of the liveliest nightlife in the Americas. Throughout the guide practical advice is given on a range of activities, including rafting and trekking in the Amazon jungle.

Dilwyn Jenkins has been traveling to South America since the age of 18. After working as a teacher and journalist, he has led expeditions to and made films with indigenous groups in the Amazon. He is the author of The Rough Guide to Peru (with Kiki Deere), Renewable Energy Systems: The Earthscan Expert Guide to Renewable Energy Technologies for Home and Business, and DK Eyewitness Travel Guide: Brazil (with Oliver Marshall).

WHERE TO GO With each region offering so many different attractions, it’s hard to generalize about the places you should visit first: the specific attractions of each part of Peru are discussed in greater detail in the chapter highlights and introductions. Apart from the hot and largely unattractive capital, Lima, where you are most likely to arrive, Cusco is perhaps the most obvious place to start. It’s a beautiful and bustling colonial city, the ancient heart of the Inca Empire, surrounded by some of the most spectacular mountain landscapes and palatial ruins in Peru, and by magnificent hiking country. A particularly tough but rewarding journey is the trek along the long and winding Inca Trail, which culminates at the high, fog-shrouded Inca citadel of Machu Picchu.

Yet along the coast, too, there are fascinating archeological sites – the bizarre Nazca Lines south of Lima, the great adobe city of Chan Chan in the north – and a rich crop of sea life, most accessible around the Paracas National Park. Almost all of the coastal towns come replete with superb beaches, plentiful nightlife and great food. If all that sounds too exhausting, one can always duck away to spend a day lazily sipping wine at the many Ica Valley bodegas. For mountains and long-distance treks there are the stunning glacial lakes, snowy peaks and little-known ruins of the sierra north of Lima, above all around Huaraz and Cajamarca. If it’s wildlife you’re interested in, there’s plenty to see almost everywhere. But the jungle provides startling opportunities for close and exotic encounters.

From the comfort of tourist lodges in Iquitos to exciting river excursions around Puerto Maldonado, the fauna and flora of the world’s largest tropical forest can be experienced first-hand perhaps more easily than in any other Amazon-rim country. Not too far from Iquitos there’s the Pacaya Samiria National Reserve, a remote and stunningly beautiful region which is one of the least-visited parts of the Peruvian rainforest; in the South there’s the newly created Tambopata-Candamo Reserved Zone which incorporates around 600,000 hectares of the upper Tambopata plus Candamo river and tributaries, containing some of the most exciting jungle and richest flora and fauna in the world.

WHEN TO GO Picking the best time to visit Peru’s various regions is complicated by the country’s physical characteristics. Summer along the desert coast more or less fits the expected image of the southern hemisphere – extremely hot and sunny between December and March (especially in the north), cooler and with a frequent hazy mist between April and November – although only in the polluted environs of Lima does the coastal winter ever get cold enough to necessitate a sweater. Swimming is possible all year round, though the water itself (thanks to the Humboldt Current) is cool-to-cold at the best of times.

To swim or surf for any length of time you’d need to follow local custom and wear a wet suit. Apart from the occasional shower over Lima it hardly ever rains in the desert. The freak exception, every ten years or so, is when the shift in ocean currents of El Niño causes torrential downpours, devastating crops, roads and communities all down the coast. It last broke in 1983. In the Andes, the seasons are more clearly marked, with heavy rains from December to March and a warm, relatively dry period from June to September. Inevitably, though, there are always some sunny weeks in the rainy season and wet ones in the dry. A similar pattern dominates the jungle, though rainfall here is heavier and more frequent, and it’s hot and humid all year round.

Ideally, then, the coast should be visited around January while it’s hot, and the mountains and jungle are at their best after the rains, from May until September. Since this is unlikely to be possible on a single trip there’s little point in worrying about it – the country’s attractions are invariably enough to override the need for guarantees of good weather.