Items related to The Rough Guide to Malaysia, Singapore & Brunei... 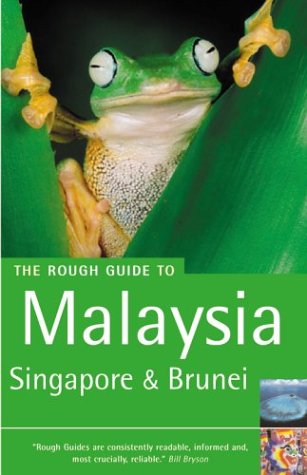 The Rough Guide to Malaysia, Singapore & Brunei is the definitive guide to these three fascinating Southeast Asian countries. There’s detailed coverage of Malaysia’s superb natural attractions, including Taman Negara – the Peninsula’s main national park, with its four gateways – and, in Sabah and Sarawak, Mount Kinabalu and the limestone pinnacles at Mulu. Great beaches and islands also get full attention, including the islands of Langkawi, the Perhentians and the dive mecca of Sipidan. There’s plenty on the indigenous tribes of Borneo too, including how to make upriver trips to traditional longhouses. The book also provides the lowdown on Singapore’s burgeoning entertainment scene – from alternative gigs to cutting-edge theatre – and uncovers the secret charms of secluded Brunei. All the background you need to get the best out of these multicultural nations is here, including a food vocabulary to help you order the best Malay, Chinese and Indian fare, and insights into local etiquette.

Malaysia's fast-growing capital, Kuala Lumpur (or just KL) makes much the same initial impression as does Singapore, with high-rise hotels and air-conditioned shopping malls, and characterful ethnic areas like Chinatown and Little India. The seat of government for the federation, KL is also the social and economic driving force of a nation eager to better itself, a fact reflected in the growing number of designer bars and restaurants in the city, and in the booming manufacturing industries surrounding it. A light rail transit system around KL is the latest sign that it is gearing up for a mass influx of visitors for the 1998 Commonwealth Games. But this is a city firmly rooted in tradition, where modern Malay executives might have a cellular phone to hand, but will never miss Friday prayers. And although the city is changing quickly - the skyline appears to be redesigned annually - life on the busy streets still has a raw feel, with markets and food stalls crowded in amongst new banks and businesses.

Less than three hours south of the capital lies the birthplace of Malay civilization, Melaka, a must on anybody's itinerary. Much further up the west coast is the first British settlement, the island of Penang, with old colonial buildings and a vibrant Chinatown district adorning its capital, Georgetown. In between KL and Melaka is a string of old tin-mining towns, such as Ipoh and Taiping, which provided the engine of economic change in the nineteenth century. For a taste of Old England, head for the hill stations of Fraser's Hill, Cameron Highlands and Maxwell Hill, where cooler temperatures and lush countryside provide ample opportunities for walks, rounds of golf and cream teas. North of Penang, there's a more Malay feel to the country, with Alor Setar forming the last stronghold before the Thai border. This far north, the premier tourist destination is Pulau Langkawi, a popular duty-free island.

Routes down the Peninsula's east coast are more relaxing, running past the sleepy kampungs of the mainland - Merang, Cherating and Marang - and the stunning islands of Pulau Perhentian, Pulau Redang and Pulau Tioman. The state capitals of Kota Bharu, near the northeastern Thai border, and Kuala Terengganu, further south, are showcases for the best of Malay traditions, craft production and performing arts.

Crossing the Peninsula's mountainous interior by road or rail allows you to venture into the unsullied tropical rainforests of Taman Negara. The park's four thousand square kilometres has enough to keep you occupied for weeks: trails, salt-lick hides for animal-watching, a high canopy walkway, limestone caves and waterfalls. Other interior routes can take in a ride on the jungle railway, which links east and west coasts, and visits to the southern lakes, which retain communities of indigenous Malays.

Across the sea from the Peninsula are the Bornean states of Sarawak and Sabah. For most travellers, their first taste of Sarawak is Kuching, the old colonial capital, and then the Iban longhouses of the Batang Ai and Batang Lupar river systems, or the Bidayuh longhouses close to the Kalimantan border. Sibu, much further to the north on the Rajang river, is the starting-point for the most exciting trips, to more authentic Iban longhouses. In the north of the state, Gunung Mulu National Park is the principal destination, its extraordinary razor-sharp limestone needles providing demanding climbing. More remote still are the rarely explored Kelabit Highlands, further to the east, where the mountain air is refreshingly cool and flora and fauna is abundant.

The main reason for a trip to Sabah is to conquer the 4101-metre granite peak of Mount Kinabalu, which is set in its own national park, though the lively modern capital Kota Kinabalu and its idyllic offshore islands have their moments, too. Beyond this, Sabah is worth a visit for its wildlife: turtles, orang-utans, proboscis monkeys and hornbills are just a few of the exotic residents of the jungle, while oceanic Pulau Sipadan has a host of sharks, fishes and turtles.

Singapore For many first-time travellers to Asia, Singapore is the ideal starting point, with Western standards of comfort and hygiene, and dazzling consumerism, alongside traditional Chinese, Malay and Indian enclaves and the architectural remnants of the state's colonial past. Singapore also rightly holds the title of Asia's gastronomic capital, with snacks at simple hawker stalls, high tea at Raffles, and exquisite Chinese banquets united in their high quality. Most people find a few days in the metropolis is long enough to see the sights, fill shopping bags and empty pockets, before moving on.

Brunei Few travellers venture into Brunei, which lies between Sabah and Sarawak, perhaps put off by the high transport and accommodation costs. Certainly you'd do better to wait until you reach the east Malaysian states if you intend to visit longhouses, forests or river systems. For those who do pass through, however, there are few more stirring sights than the spectacle of the main mosque in the capital Bandar Seri Begawan, towering over the water village below, which is culturally a million miles away from the state's latest attraction, the Disneyland-style Jerudong Playground.