Items related to The Influence of Air Power Upon History

Boyne, Walter J. The Influence of Air Power Upon History

The Influence of Air Power Upon History 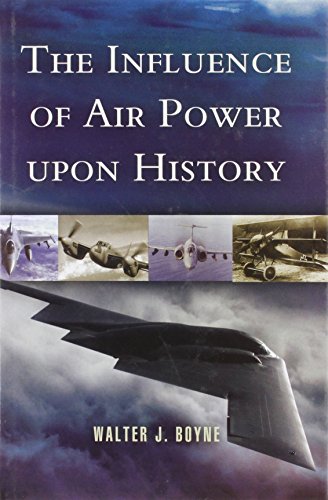 For hundreds of years before the first flight at Kittyhawk on December 17, 1903, man had sought to gain the ultimate view from the sky. There were as many ideas about how the ability to fly could be of use as there were failed machines that attempted to accomplish it. This quest for air power, defined as the ability to conduct military, commercial, or humanitarian operations from the air, has had far-reaching implications not only for combat technology, but also in politics, diplomacy, technology, and mass culture.

Where Alfred Thayer Mahan's classic work, The Influence of Sea Power upon History, catalogues the elements that made naval prowess a determinant of a nation's strength, this book studies the development of air-power philosophy by examining its theory and practice as demonstrated not only in war, but in the myriad demands it makes upon the nations that employ it.

In air power, as in sea power, the evolution from concept to practical execution goes through many individuals, each improving on previous work. The personalities of the inventors emerge as important factors in the creation and application of the new technology. This book focuses extensively on the impact of these personalities on air power and, thus, their effect on history.

Many factors influenced the development of air power, including entirely new technologies that, in recent years, have included the jet engine and precision-guided munitions. The influence of air power was aided immeasurably by the simultaneous growth of aviation, motion pictures, radio, and, later, television. In turn, the media's influence grew tremendously because of its profound ability to observe and transmit events around the globe, thereby imposing an urgency on both military and civilian life.

The Influence of Air Power upon History is a thorough examination of how air power was applied from the very earliest days of the balloon down to the latest use of space technology.

Walter J. Boyne, a retired Air Force colonel and a command pilot, is a recognized authority on air power. He has written thirty-six nonfiction works and five novels on the subject and has appeared on the New York Times bestseller lists for both fiction and nonfiction. He was one of the first directors of the Smithsonian's National Air and Space Museum and is the founder of Air & Space magazine, which has since become the best-selling aviation magazine in the United States. He went on to co-found the cable television channel Wingspan--The Air and Space Channel and appears as a commentator on aviation and military events on network news and cable channels such as the History Channel, A&E, PBS, the Discovery Channel, and Speedvision. Boyne lives in Virginia with his wife, Jeanne.

From the invention of the balloon in 1783 to the terrorist abuse of air power in 2001, the quest for and use of the ability to fly has grown from novelty to necessity.

Taking Alfred Thayer Mahan's classic work, The Influence of Sea Power upon History, as a starting point, noted aviation historian Walter J. Boyne analyzes how the ability to conduct military, commercial, or humanitarian operations from the air has had far-reaching implications for politics, technology, and mass culture. Boyne draws upon his extensive study of aviation to examine the development of air-power philosophy, through its theory and practice as demonstrated not only in war, but also in the myriad elements from which nations are built. Many of his conclusions will be found to be quite controversial, departing from the generally accepted scenarios of air power.

1. The Influence of Air Power Upon History

2. The Influence of Air Power upon History