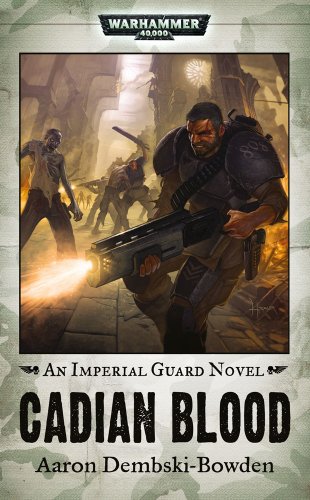 Forced into battle with a legion of those infected by the plague of Nurgle in order to reclaim the Imperial shrine world of Kathur, First Lieutenant Parmenion Thade must take a commanding role and ensure victory over insurmountable odds. Original.

Aaron Dembski-Bowden's past in the RPG and video game industries is exactly that: the past. While some of his projects were nominated for various awards and he enjoyed a chunk of successful work, he quickly grew bored of trying to live a real life. Instead, he fled to the middle of the Northern Irish countryside to live the life of a full-time novelist, with his girlfriend Cathy and a tabby cat called Loken. He's been a full-time writer ever since he left uni in the early 2000s, which he attributes to a combination of raw talent, rugged good looks, blind luck - and absolutely no modesty. His first published work for the Black Library, Cadian Blood, is about - among other things - Cadians bleeding. He's been a deeply entrenched fan of Warhammer 40,000 since he ruined his copy of Space Crusade with the painting skills expected of an overexcited nine-year-old. When he's not writing, he's usually feeling guilty for not writing, going for long walks in expensive sunglasses, or getting annoyed at his Xbox. His main hobbies include reading anything within reach, fighting his cat, and helping people spell his surname. Aaron fears only the following things: 1. Responsibility. 2. Deadlines. 3. Monsters.

"...the plot for 'Cadian Blood' is one that kept me hooked with its daring strikes, harrowing reverses and last ditch stands. The underlying mystery of the plague is also played out very well, especially when the stakes suddenly get a lot higher without any explanation... If you're a fan of military sci-fi or Warhammer 40K in general then I think you'll enjoy this too. Check it out! Nine and Three Quarters out of Ten" GRAEME'S FANTASY BOOK REVIEW