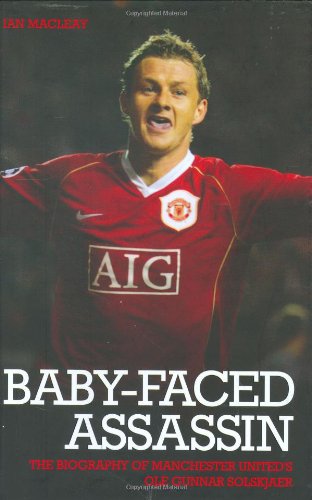 Ole Gunnar Solskjaer is an Old Trafford legend. After three injury-ravaged years, he blazed back to reignite his career and that of his club, Manchester United. His fantastic goals have thrown out a challenge to the Abramovich empire which had emerged in his absence and risen to dominate the Premiership, challenging Man United's position as the world's greatest club. Famous for his youthful looks and uncanny ability to score in the dying minutes of important games, often coming on as a 'super-sub', he's one of football's most cerebral and naturally gifted strikers. His last-gasp winner in injury time against Barcelona in 1999's Champions League final helped secure the crowning glory of Man Utd's glorious Treble. Plagued by a knee injury, Solskjaer has nonetheless earned sixty caps for Norway, and continues to put them away to deadly effect for his club, who never tire of singing 'You Are My Solskjaer' whether he's on the pitch or not. And he's committed his future to Old Trafford with the prospect of coaching duties after 2008, where his knowledge of the game, skill and attitude can continue to benefit his adopted home. In this informative and insightful book, sports writer Ian MacLeay charts the highs and lows of The Baby Faced Assassin's career to provide an in-depth look at both the man and the striker who looks set to go down in history alongside Denis Law and Jimmy Greaves. It is a must-read for any sports fan.

Ian Macleay has been a football fan since the day of Jimmy Greaves in the late 1950s. He has co-authored three accliamed books including Chelea: A 100-year History, with former Chelsea chairman Brian Mears, and The working Man's Ballet with Alan Hudson; his latest is Cole Play: The Biography of Joe Cole. He is currently writing a novel. The author lives in Surrey.

Book Description John Blake Publishing Ltd, 2007. Hardcover. Condition: Used; Good. **SHIPPED FROM UK** We believe you will be completely satisfied with our quick and reliable service. All orders are dispatched as swiftly as possible! Buy with confidence!. Seller Inventory # mon0002307202

Book Description John Blake Publishing Ltd, 2007. Hardcover. Condition: Good. All orders are dispatched the following working day from our UK warehouse. Established in 2004, we have over 500,000 books in stock. No quibble refund if not completely satisfied. Seller Inventory # mon0004585865

Book Description -. Hardcover. Condition: Very Good. Ole Gunnar Solskjaer: The Baby-Faced Assassin This book is in very good condition and will be shipped within 24 hours of ordering. The cover may have some limited signs of wear but the pages are clean, intact and the spine remains undamaged. This book has clearly been well maintained and looked after thus far. Money back guarantee if you are not satisfied. See all our books here, order more than 1 book and get discounted shipping. Seller Inventory # 7719-9781844544608

Book Description John Blake Publishing Ltd 03/09/2007, 2007. Condition: Very Good. Shipped within 24 hours from our UK warehouse. Clean, undamaged book with no damage to pages and minimal wear to the cover. Spine still tight, in very good condition. Remember if you are not happy, you are covered by our 100% money back guarantee. Seller Inventory # 6545-9781844544608

Book Description Hardback. Condition: Very Good. The book has been read, but is in excellent condition. Pages are intact and not marred by notes or highlighting. The spine remains undamaged. Seller Inventory # GOR003305946

Book Description Hardback. Condition: Good. The book has been read but remains in clean condition. All pages are intact and the cover is intact. Some minor wear to the spine. Seller Inventory # GOR002860595