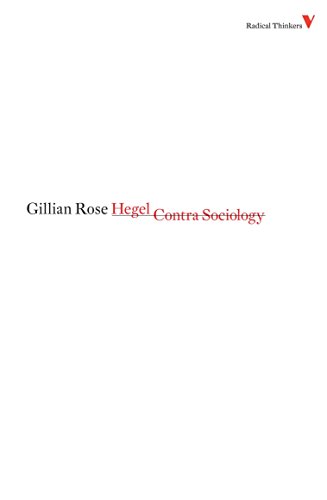 Gillian Rose is among the twentieth century’s most important social philosophers. In perhaps her most significant work, Hegel Contra Sociology, Rose mounts a forceful defence of Hegelian speculative thought. Demonstrating how, in his criticisms of Kant and Fichte, Hegel supplies a preemptive critique of Weber, Durkheim, and all of the sociological traditions that stem from these “neo-Kantian” thinkers, Rose argues that any attempt to preserve Marxism from a similar critique and any attempt to renew sociology cannot succeed without coming to terms with Hegel’s own speculative discourse. With an analysis of Hegel’s mature works in light of his early radical writings, this book represents a profound step toward enacting just such a return to the Hegelian.

Gillian Rose was a British philosopher and sociologist. She is the author of Paradiso, Mourning Becomes the Law, and Hegel Contra Sociology.

“Her finest and most accomplished book ... Inspirational and profound scholarship.”—Radical Philosophy

“Writing wholly from within the tradition of modern European philosophy and social thought, [Rose] produced one of the most distinctive and original bodies of work of her generation.”—Guardian