Items related to A Scented Palace: The Secret History of Marie Antoinette'...

A Scented Palace: The Secret History of Marie Antoinette's Perfumer 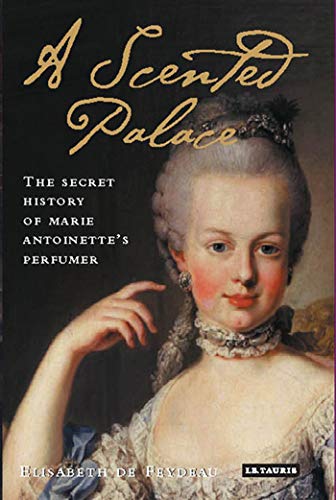 This book offers a new look at the world of Marie Antoinette through the story of her personal and exclusive perfumer, Jean-Louis Fargeon. Jean-Louis served Marie for fourteen years until 1789 when the Revolution swept across France, its wrath aimed at the extravagances of the Royal Court and those who served it. Fargeon, a lifelong supporter of the Republican cause but a purveyor to the court, was in a dangerous position. Yet he remained fiercely loyal to Marie Antoinette, beyond her desperate flight to Varennes, her execution and even through his own imprisonment and trial. A Scented Palace is a wonderful window into the world of France during its most brutal and violent days.

Elisabeth de Feydeau studied the history of perfume at the Sorbonne. She is a professor of the Versailles School of Perfumers and cultural adviser to France's great perfume houses, including Chanel and Guerlain. She was awarded the Prix Guerlain for this book.

Feydeau, a professor at the Versailles School of Perfumers, draws on the papers of perfumer Jean-Louis Fargeon to reveal the secrets of his luxurious creations for Marie Antoinette. A native of Montpellier, Fargeon moved to Paris, becoming an apprentice to one of the city's most fashionable perfumers. Fargeon won the queen's favor with a gift of exceptional scented kidskin riding gloves and rapidly gained her confidence; he treated her secret pregnancy-related hair loss and became her loyal friend. Tracing Marie Antoinette's extravagant expenditures and far-fetched follies amid increasingly enraged public opinion, Feydeau charts the fall of the house of Versailles, Marie Antoinette's decline during her imprisonment and Fargeon's own fate. While the perfumer declared himself to be a Republican, he was also a wealthy man with royal connections and thus a natural target for the Revolution. While arrested, he managed to escape trial. Feydeau's modest tome is sympathetic to Marie Antoinette; rather than provide much historical context, it spotlights the intimate life of the palace, excelling chiefly in explanations of fascinating 18th-century beauty secrets, from black adhesive taffeta beauty spots to swan's down powder puffs. Botanical appendixes list the ingredients and methods of Fargeon's influential unguents. (July)
Copyright © Reed Business Information, a division of Reed Elsevier Inc. All rights reserved.

1. A Scented Palace: The Secret History of Marie Antoinette's Perfumer

2. A Scented Palace: The Secret History of Marie Antoinette's Perfumer