Items related to A Brief Guide to Islam

A Brief Guide to Islam 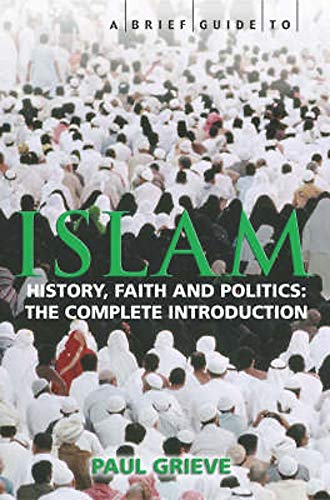 Exploring the beliefs, history and politics of the ordinary people of Muslim countries, Islam specialist Paul Grieve offers the most balanced and comprehensive account of Islam available. He addresses the big issues - can Islam support true democracy or is the West merely seeking a cover of legitimacy for a policy of 'might is right'? - and challenges stereotypical views in areas such as arts, women, banking, war, Malcolm X and literature. This is the ideal summary for the reader looking for an unbiased overview of political and religious world issues now part of our everyday lives.

While writing his critically successful novel Upon a Wheel on Fire, set against the organs of WWII, Paul Grieve became interested in the same events in the eastern Mediterranean, and particularly in the end of the Ottoman Empire and origins of the State of Israel. In order to understand the resulting conflicts in the present, Grieve decided to study Islam. After two years at the Mosquee de Paris he spent a further three years in the Middle East studying Islamic history, jurisprudence, politics and Arabic, with experts at Cairo University and the American University. The result is this book and a second novel. Grieve now lives in London.

Starred Review. Grieve, a London-based writer and self-styled student and traveler of the Islamic world, puts forward a riveting book on Islam that decries and then corrects the widespread ignorance about the faith and its history. He consistently jolts the reader out of preconceived notions about Islam and Muslims, particularly concerning the Palestinian conflict. Grieve's precise insights into the Muslim worlds, past and present, are astonishingly accurate. He provides the real and surprising backstory on everything from the Crusades and colonialism to Muslim immigration to Europe and women under Islam. He also provides succinct introductory information on Islam, including recommending Qur'an translations and reviewing standard prayer techniques. Of the harsh reputation Islam has received in the West, Grieve writes: "The universal message of Christianity would be similarly diminished... if the faith were to be defined only by reference to sectarian murders in Northern Ireland, the history of the Spanish Inquisition, or the sad stories of lust and greed in modern television evangelism." His book is by no means an ode of praise to Islam; he is properly critical of the marginalization of women in Muslim societies, which he argues will hold the Muslim world back. If you read only one book about Islam this year, this should be it. (Apr.)
Copyright © Reed Business Information, a division of Reed Elsevier Inc. All rights reserved.

1. A Brief Guide to Islam

2. A Brief Guide to Islam

5. A Brief Guide to Islam (A Brief History of)